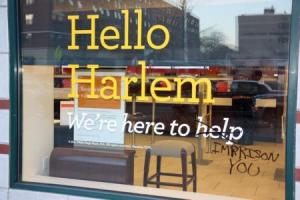 Via Families for Freedom

Members of Families for Freedom joined with the Occupy Wall Street (OWS) Immigrant Worker Justice working group and the OWS Prisoner Solidarity working group to protest the connection between investment in private prisons and the mass incarceration of prisoners and immigrant detainees. Hundreds of protestors marched in Harlem highlighting the role private prison companies have played in supporting anti-immigrant policies, leading to record detention and deportation rates. The protest ws part of a national day of action during which over 15 cities held protests in solidarity with the ongoing hunger strike at California’s Pelican Bay State Prison, with communities dispossessed by the criminal injustice system, and with political prisoners everywhere.

The rally began in front of the Lincoln Correction Facility in Harlem, one of New York City’s many African-American neighborhoods devastated by the explosive growth in prisons over the past few decades. From there, protesters  marched to a branch of Wells Fargo bank, where we mic checked them for their calling them to divest from two private prison companies, the GEO Group and Corrections Corporation of America (CCA). Both GEO and the CCA have extensively lobbied state and federal governments to pass laws, like Arizona’s SB1070 and Alabama’s HB56, that place greater numbers of non-U.S. citizens in the immigrant detention and deportation system. As a result of these efforts, GEO and CCA made over $2.9 billion in profits in 2010.

You can view the rally in this video and our Wells Fargo Mic Check 5 minutes into the video featuring Families for Freedom member Jane Lu. Click here for photos