From 2008- 2011, Freedom to Thrive (Formerly Enlace) undertook strategic research on mass incarceration and deportations. In 2011 Freedom to Thrive launched the Prison Industry Divestment Campaign to address the root causes of harm to communities of color caused by the Criminal and Immigration System.

Freedom to Thrive (Formerly Enlace) works to create a world where safety means investment in people & planet and to end the punishment-based criminal and immigration systems. For additional information visit Freedom to Thrive’s webpage. 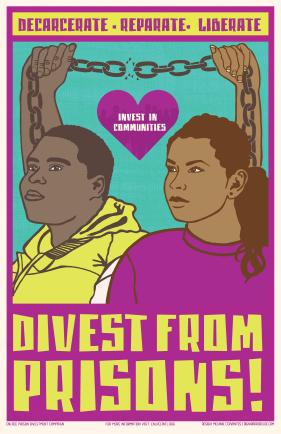 The Prison Industry Divestment Campaign targets the State and corporations as root causes of criminalization, incarceration, and violence against our communities. We have waged successful campaigns against politicians, Wall St, banks, and prison industry corporations.

Our research has followed how the State and corporations have expanded prisons to our homes through electronic shackles and other forms of prisons, and the connections between Police, ICE, and Border Patrol.

The Campaign has since become a national movement bringing together Black, Brown, and LGBTQ communities to divest from criminalization and incarceration, and demand reparations and investment in our communities!

The Prison Industry Divestment Movement is part of a larger movement called #FreedomCities that is building multiracial power at the local level by redefining what Safety and Freedom mean for our communities. Visit the Freedom Cities for more information.

Freedom to Thrive (Formerly Enlace), in partnership with community groups and unions across the US, is calling on all public and private institutions to divest their holdings in Corrections Corporation of America (CCA), G4S, GEO Group, and other companies operating in the Prison Industrial Complex.

These companies have profited from billions in taxpayer money. Both CCA and GEO Group are publicly-traded companies that rely on financing and other assistance from major investors to employ their powerful lobbying efforts in Congress, federal agencies, and state capitols across the country.  Therefore, investors have a direct responsibility in CCA’s and GEO’s efforts to create felons to fill our prison system. Major investors and financiers include Wells Fargo, Vanguard, Blackrock, Chase, and Bank of America.

The National Prison Industry Divestment Campaign focuses on an underlying source of undignified immigration policy, namely the connection between major financial institutions and the for-profit prison industry and their joint role in the accelerated incarceration of immigrants.

Our campaign draws inspiration from the South Africa Anti-Apartheid Movement of the 1980s, which applied an effective divestment strategy in the United States. The anti-apartheid divestment campaign is a concrete example of a powerful grassroots campaign that succeeded in the United States even though a popular U.S. president, Ronald Reagan, opposed it.  Anyone who wanted to could participate, and so the campaign succeeded in engaging the participation of different kinds of groups including students, churches, human rights, labor, and civil rights organizations.

Apartheid was the policy used by government of South Africa to brutally enforce White supremacy and racial segregation in residential areas, medical care, education, employment, and public services. South Africa’s majority Black population were not allowed to be citizens under apartheid, nor were they allowed to travel outside areas where they lived for work without government-issued documents allowing them to do so. Starting in the 1950’s the African National Congress (ANC) and others spearheaded an international campaign to end this brutal system in South Africa.

As a part of their campaign strategy, the ANC sought help in developed countries outside South Africa through what was called Anti-Apartheid Divestment. The focus of this effort was to push corporations, universities and governments with financial ties to the South African government to divest all their holdings.

In the United States, these corporations included IBM, Hewlett Packard and General Motors as well as investors such as the University of California.

The Anti-Apartheid Divestment effort in the United States engaged students, churches, unions and other social activist groups. Beginning in the late 1970s, a growing number of religious, labor and higher education institutions started to divest their holdings in corporations with ties to the government of South Africa. It gained so much momentum that in 1988 the U.S. Congress passed, the Comprehensive Anti-Apartheid Act, which prohibited new investment in South Africa. President Ronald Reagan then vetoed it but the anti-apartheid divestment campaign had so much popular support that Congress voted to override President Reagan’s veto by more than a two-thirds majority, and the Comprehensive Anti-Apartheid Act became law. South Africa’s apartheid system ended in 1994.