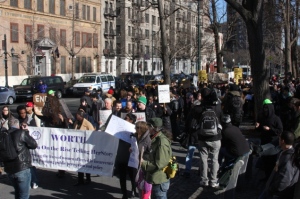 Protesting prisons-for-profit that prey on the poor, powerless immigrant detainees

Incarcerating poor, powerless people for profit is a despicable business, but it sure is profitable.

“Hello Harlem, we’re here to help” reads an unintentionally ironic sign in a Wells Fargo bank, a major investor in two private prison companies, the GEO Group and the Corrections Corporation of America (CCA) that in 2010 made a whopping $2.9 billion in profits.

On Monday 200 people took to the streets to protest the scandalous connection between investment in private prisons and the mass jailing of prisoners and immigrant detainees for profit. The demonstration was organized by the Occupy Wall Street Immigrant Worker Justice working group and the OWS Prisoner Solidarity working group,

“[For these corporations\] the more people in prison the better it is for business,” said Mariano Muñoz of the Occupy Wall Street Immigrant Worker Justice working group.

Not surprisingly, both GEO and the CCA spend a pretty penny lobbying at both the state and federal level for laws like the infamous Arizona and Alabama anti-immigrant legislations.

“[Those laws\] place greater numbers of non-U.S. citizens in the immigrant detention and deportation system,” Muñoz added. “And that’s good for business.”

Private prison corporations that profit from detention and deportation policies make tons of money by locking up poor, powerless immigrants for months and even years with little federal supervision. One of these jails is located in Springfield Gardens, Queens, and many voices have been raised in protest.

A spokesman for Wells Fargo denied the company owns shares of  GEO or CCA or that it  is invested  in either company. “Wells Fargo Advantage Funds currently holds a small position in mutual funds that we administer as a trustee on behalf of fund shareholders.  Wells Fargo is not the owner.  Public filings and website listings can give the incorrect impression that Wells Fargo is an owner of a company’s stock – we are not. These shares are owned by various Wells Fargo mutual funds. Wells Fargo is not a beneficial owner of these mutual funds, but serves as an adviser,” he said.

The rally last week focused on the role those private prison companies have played in supporting anti-immigrant policies, leading to record detention and deportation rates.

The rally began in front of the Lincoln Correction Facility in Harlem, one of the city’s many African-American neighborhoods devastated by the explosive growth in prisons over the past few decades. From there, protesters marched to a Wells Fargo bank branch.

The rally was part of the National Occupy Day in Support of Prisoners that “called attention to the economic hardships of the 99% and the impact on people of color incarcerated in the U.S.,” stated the Detention Watch Network (DWN).

The network, along with dozens of prisoners’ rights and Occupy groups took part in the day of protest.

The growth of the immigration detention system has been explosive. Since 1996 it has grown from 70,000 people detained annually to more than 380,000 in 2009, according to DWN.

No one is spared from the system. Families, undocumented and documented immigrants, people who have been in the U.S. for years, survivors of torture, asylum seekers and other vulnerable groups including pregnant women, children, and individuals who are seriously ill without proper medication or care can be found in detention centers.

The U.S. is the world’s leading jailer and maintains a large network of detention facilities, comprised of a hodgepodge of about 350 federal and private facilities, state prisons and county jails, at an annual cost of more than $1.7 billion to taxpayers, says DWN.

The growth of the detention system has been accompanied by higher levels of abuse, substandard living conditions, and over 120 immigrant deaths since 2003, DWN added.

“Immigrants are both the targets of the Wells Fargo backed private prison industry and the victims of free trade laws and American foreign policy initiatives that have crippled their local economies,” said Andrea Black, DWN executive director. “Today we stand with those incarcerated on U.S. soil and demand justice for all.”

Most New Yorkers support the protestors’ rejection of those who profit from the mass incarceration of society’s most vulnerable members, Muñoz said.

“The protest was a success and the people of Harlem were extremely receptive,” he said.