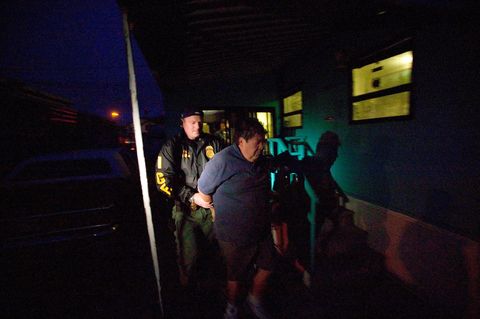 The best bit of journalism I’ve read in a while is in The Atlantic, in which Franklin Foer does a Captain Nemo into the recent history and rise of the Immigration and Customs Enforcement service. Foer begins with a now-sadly-customary story about the rousting of some Mauritanian immigrants in Columbus, Ohio. The Mauritanians in question were black citizens who had been brutalized by the Muslim majority government there.

A lithe, haggard man named Thierno told me that his brother had been detained by ICE, awaiting deportation, for several months now. The Mauritanians considered it a terrible portent that the agency had chosen to focus its attention on Thierno’s brother—a businessman and philanthropically minded benefactor of the mosque. If he was vulnerable, then nobody was safe. Eyes watering, Thierno showed me a video on his iPhone of the fate he feared for his brother: a tight shot of a black Mauritanian left behind in the old country. His face was swollen from a beating, and he was begging for mercy. “I’m going to sleep with your wife!” a voice shouts at him, before a hand appears on-screen and slaps him over and over.

For a while, they were comfortably settled in here. Then the United States had an election.

Suddenly, in the warehouses where many of the Mauritanians worked, white colleagues took them aside and warned them that their lives were likely to get worse. The early days of the administration gave substance to these cautions. The first thing to change was the frequency of their summonses to ICE. During the Obama administration, many of the Mauritanians had been required to “check in” about once a year. Abruptly, ICE instructed them to appear more often, some of them every month. ICE officers began visiting their homes on occasion. Like the cable company, they would provide a six-hour window during which to expect a visit—a requirement that meant days off from work and disrupted life routines. The Mauritanians say that when they met with ICE, they were told the U.S. had finally persuaded their government to readmit them—a small part of a global push by the State Department to remove any diplomatic obstacles to deportation.

Make no mistake. The primary goal of this administration* is to make America as white as Stephen Miller thinks it should be. Nothing will stand in the way of this goal—certainly, human decency won’t. Foer then goes on to describe how the new president* empowered ICE as the sharp edge of his policy, and the giddy glee with which ICE accepted the job. He describes an agency that is both a highly militarized police force with a highly militarized attitude toward the performance of suddenly militarized duty.

He illustrates this by sitting in on one guy’s regularly scheduled meeting with ICE personnel—meetings that were pretty much pro forma before this president* let the creature out of the lab, but which now appear to be exercises akin to Winston Smith’s having an encounter with the gang down in HR.

Two minutes later, an officer with a shaved head, a black Under Armour hoodie, and a gun on his belt leaned his body through the door to stare intently at Ismael. “Why have you been working?” he asked. “We know you’ve been working.” It appeared to be an annoyed response to the lawyer’s resistance, hurled without evidence, perhaps in the hopes of provoking a self-incriminating response. It seemed of a piece with the fraught atmosphere in the waiting room. Earlier, there had been an announcement that a car was parked illegally outside and needed to be moved. Ismael’s lawyer had leaned over to tell me that this would be widely presumed to be another trick: Many immigrants under ICE scrutiny are not allowed to drive.

When immigration lawyers in Columbus deal with ICE, they are tentative, fretful that anything that might reek of complaint could provoke ICE into seeking retribution against their clients. So Ismael’s lawyer struck a stance of studied conciliation. As she gently explained herself, Ismael disappeared behind the door for his appointment and another manager emerged. He said that the man handling Ismael’s “intensive supervision” worked for a private contractor hired by ICE, and that the company’s contract with the federal government prohibited lawyers from attending its sessions with immigrants. “Just out of curiosity,” the lawyer asked, “can I see a copy of the rules?” The supervisor returned with a sheet of paper. He pointed to the crucial passage in a section enumerating “participant rights.” It described “the right to confidentiality with the exception of information requested by ICE.” The lawyer flashed me a furtive smirk as she refrained from commenting on the bravura display of doublespeak: Ismael had been denied his right to an attorney in order to protect his confidentiality.

This is not just bad. It is hilariously bad. Ever since the “war” on drugs kicked off, we have been awash in perilous ad hoc law-enforcement procedures designed, it would appear, to chase the demon du jour without tripping over that pesky Constitution. The attacks of September 11, 2001, in reaction to which ICE was formed as part of the new Department of Homeland Security, only threw this phenomenon into hyperdrive, with the Bush Administration grabbing whatever ideas were lying around the shelves at Langley or in the J. Edgar Hoover Building and throwing them willy-nilly into the statute books.

In addition, ICE is not exactly skimming the cream of the applicants for federal law enforcement. Unsurprisingly, it seems to be a downright lousy place to work.

ICE consistently ranks among the worst workplaces in the federal government. In 2016, the organization ranked 299th on a list of 305 federal agencies in a survey of employee satisfaction. Even as Trump smothered the organization with praise and endowed it with broader responsibilities, ICE still placed 288th last year.

The rest of the piece is a judicious account of how ICE has grown beyond its ambiguous original mandate, and how it now is the law-enforcement brute force behind an immigration policy that appears to be located entirely in the president*’s spleen. There are some sympathetic nods toward ICE personnel, to be sure, but there also is an account of what nearly was an open revolt against President Barack Obama when the latter changed his own policies and reined ICE in.

But the meat of the story—and the most thoroughgoing indictment of what ICE has become—is how the agency’s marriage to private, for-profit contractors has brought out every instinct ICE had for basic inhumanity. In turn, this has pumped new life into the corporations involved in private prisons generally.

Jeremy Jong, an attorney with the Southern Poverty Law Center, described to me a conversation he had with an ICE official at a Louisiana detention facility. The official bragged that “he always did his best to fulfill his contractual obligation to keep the center’s beds full of inventory.” The description of immigrants as “inventory” is a logical extension of how ICE has outsourced detention to private firms, for which each confinement represents additional profit. Detention is a boom industry, backed by such megafunds as Vanguard and BlackRock, and it has experienced a decade of steroidal growth. In the months following Trump’s election, the stock prices of the biggest detention companies, the Geo Group and CoreCivic, rose by more than 100 percent. (Those prices have leveled out since then.) Last year, the bipartisan army of lobbyists employed by the Geo Group and its primary competitors included power firms Akin Gump and the Gephardt Group, founded by former House Majority Leader Richard Gephardt. That fall, the Geo Group celebrated its good fortune by holding its annual leadership conference at the Trump National Doral resort, in Miami.

At other points in our national history, we considered human beings in chains as “inventory.” This, if I recall correctly, did not end well.

Private detention companies’ contracts with ICE stipulate that they uphold a set of rigorous standards, but they of course seek to tamp down costs, which means that they may skimp on basic care for detainees. Take the CoreCivic facility in Elizabeth, New Jersey, which a group of lawyers and health professionals assembled by Human Rights First toured last year. What they discovered on their visits were reports of maggots in the showers and raw food served in the cafeteria, not to mention drinking water described as “pure bleach.” Several detainees said they avoid asking for dental care because the dentist at the facility only performs extractions, even when a filling would do. Mental-health treatment commonly includes “bibliotherapy”—the assignment of self-help books—despite the obvious fact that prolonged detention can bring stress and depression.

This is what you get when you decide that the yahoos and goobers who chant at your rallies are the people for whom you should make public policies. This is worse when you are someone who knows nothing about anything. The administration*’s immigration policies are the one area in which it has been consistent. More’s the pity.