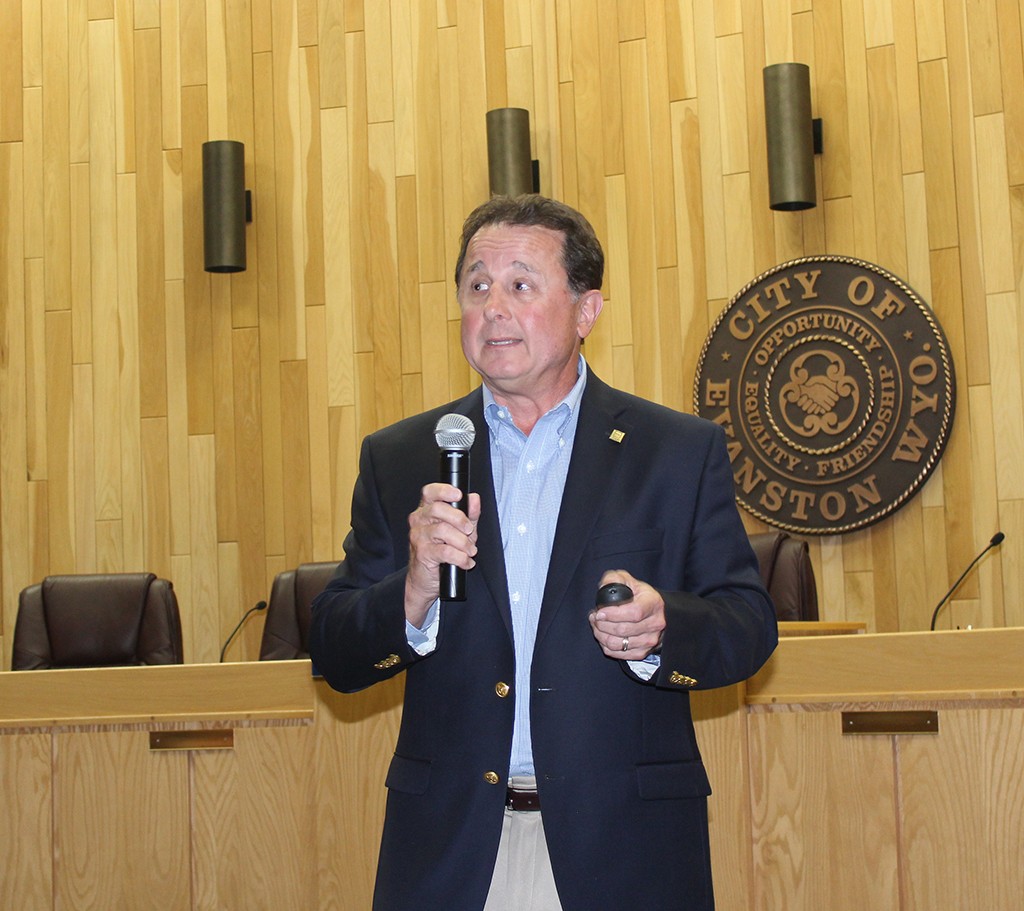 WyoSayNo — described by organizer Antonio Serrano as a coalition of concerned people who are from Wyoming, love Wyoming and are concerned about the impact such a facility would have on Wyoming communities — has a website, an active Facebook social media presence and an official launch event scheduled for Saturday, Jan. 13, in Cheyenne, with simultaneous watch parties scheduled in communities around the state.

Dalia Pedro, fellow organizer, said the purpose of the WyoSayNo group and the launch event is to provide information on what an immigration center would mean for Wyoming communities, including those in Uinta County, and to hopefully stop its construction.

Serrano and Pedro said they are very concerned about the proposed center for several different reasons. Both said they work extensively with immigrant families in Wyoming and believe an ICE detention center would be detrimental to Wyoming communities by breaking up immigrant families.

Pedro said in her work with the Immigration Alliance of Casper it’s a common problem for a family breadwinner to be detained, which often results in citizen children then becoming dependent on government assistance due to the loss of income.

Serrano said he works with Juntos in Cheyenne, an organization focused on protecting children when parents are detained.

Both Serrano and Pedro expressed concern about the for-profit nature of the facility.

“When there is profit involved in locking people up,” Pedro said, “there is an incentive to want to make as much money as possible, which leads to cutting corners. The mentality of making profit off of locking people up makes it really easy to try to find ways to make more money and housing people in not-so-good conditions.”

Pedro also said she believes simply having an immigration center in Wyoming would lead to increased efforts to detain people and more families being broken up because a for-profit facility creates a drive to fill the beds.

Serrano said he was concerned about MTC in particular, pointing to problems at MTC-owned facilities in Texas and New Mexico, two sites documented in a recent Casper Star Tribune story on Friday, Jan. 5. That piece mentions allegations of understaffing, tainted food and sexual abuse of detainees at the MTC facility in Texas and inspection failures at the New Mexico facility due to unsanitary conditions and misuse of solitary confinement for detainees.

A WyoSayNo press release said MTC “has previously lost contracts with ICE due to the substandard and inhumane living conditions of their prisons.”

The WyoSayNo launch event will feature multiple speakers discussing what they view to be negative consequences of the proposed facility, not just for Uinta County but for Wyoming and the surrounding areas.

“This doesn’t just affect Uinta County,” said Serrano. “This will break up families everywhere and have a big reach all over the state. This is a Wyoming issue, not just a Uinta County issue.” Pedro said families in neighboring states would be affected as well.

Besides just breaking up families, Serrano, a Wyoming native, said he is concerned about Wyoming’s image and what such a center could mean for future efforts at diversifying the state’s economy.

“Places like that change the way people look at a community and a state,” he said. “It creates division and turns people away who may be looking at coming here. I love my state and I love it too much to see that happen.”

Pedro said she disagrees with Gov. Matt Mead’s recent statement that a detention center is not a prison and therefore would not need the approval of the five statewide elected officials. “Any place or site that holds people and locks them up is a prison,” she said. “If the governor is in denial of that then he needs to step back and take a long look at it.”

Serrano said he hopes Mead will continue to look into the proposal.

“I wish he wouldn’t just step away from the problem,” he said.

The pair of organizers said they recognized the desire of local officials to look for a solution to economic hardship and create jobs, but they both said they don’t believe a detention center is going to be that solution.

“We should be investing in other ways to diversify and we need to have a serious conversation about diversification,” said Pedro. “But what are the long-term goals? What kind of jobs would these be? Are these the kind of jobs that people in Evanston really want?”

Serrano said he doubts the number of jobs generated would be what MTC officials have claimed and said he has been to detention centers through his work and he thinks people may not realize how much of the work in them is actually done by the detainees themselves.

“I don’t believe there would be as many jobs or as high-paying jobs as they claim,” he said. “From what I understand, MTC came in and are selling this as some sort of great thing that’s going to help the community. But MTC is a for-profit company that is interested in making money and not in helping Wyoming communities.”

Serrano and Pedro said they hope to have a large turnout at the main launch event in Cheyenne and the simultaneous watch parties around the state. Although they do not currently have an event registered for Uinta County, they are hopeful that will change before Saturday.

“People are afraid of backlash,” said Pedro. “People in Evanston have had some desperate times and are only looking at jobs, but we know there are concerned people there, too.”

Both organizers said they had talked to concerned people in Uinta County and other WyoSayNo organizers have been in contact with Evanston students attending the University of Wyoming who are opposed to the proposed facility.

Serrano said following the speakers, the plan is to get concerned people brainstorming and coming up with ways to spread information and get more people involved.

“There is a lack of information and a lot of misinformation,” said Pedro. “People need to have the facts straight.”

Pedro said there’s a lot of work to be done for those who would like to volunteer.

“I think everybody who wants to be involved can be involved,” she said. “Just reach out or sign up through our Facebook page; there is plenty to do.”

Serrano said he hopes those in favor of or undecided about the proposal will do some thinking.

“I really want people to stop and take a minute and think about how intertwined immigrants are in Wyoming,” he said, “and recognize how much immigrants are part of our state, especially small-town farmers and ranchers. I want people to really consider what and how it could negatively affect all of us.”

Serrano and Pedro both said they ultimately have faith that the people of Wyoming will choose to oppose the facility and stop its construction.

“Wyoming is better than that,” Serrano said. “We’re better than resorting to making money off of locking people up.”