SAN FRANCISCO — In an open letter posted to Microsoft’s internal message board on Tuesday, more than 100 employees protested the software maker’s work with Immigration and Customs Enforcement and asked the company to stop working with the agency, which has been separating migrant parents and their children at the border with Mexico.

“We believe that Microsoft must take an ethical stand, and put children and families above profits,” said the letter, which was addressed to the chief executive, Satya Nadella. The letter pointed to a $19.4 million contract that Microsoft has with ICE for processing data and artificial intelligence capabilities.

Calling the separation of families “inhumane,” the employees added: “As the people who build the technologies that Microsoft profits from, we refuse to be complicit. We are part of a growing movement, comprised of many across the industry who recognize the grave responsibility that those creating powerful technology have to ensure what they build is used for good, and not for harm.”

The letter is part of a wave of tech workers mobilizing this week against the Trump administration’s new “zero tolerance” policy that refers for criminal prosecution all immigrants apprehended crossing the border without authorization. The policy has resulted in about 2,000 children being separated from their migrant parents, raising a bipartisan outcry.

At Silicon Valley companies including Google, Apple and Facebook, employees have in recent days circulated internal emails asking for donations to nonprofit groups that support immigrants. Many have shared information about protests in San Francisco and Washington. And some of the workers have spoken to their managers about the issue or called on internal message boards for their chief executives to respond.

The activity has had an effect. Late on Tuesday, after Microsoft’s employee letter went up, the company released a memo from Mr. Nadella in which he called the immigration policy “cruel and abusive” and said Microsoft was not working with the federal government on any projects to separate families. Microsoft’s president, Brad Smith, also published a blog posttitled, “The Country Needs to Get Immigration Right.”

Their comments came after other tech chief executives spoke up on Tuesday. Apple’s chief, Timothy D. Cook, in an interview with The Irish Times, called the immigration policy “heartbreaking.” Elon Musk, the chief executive of Tesla and SpaceX, tweeted that he was a “top donor” to the American Civil Liberties Union and said that “if there is some way for me to help these kids I will do so.” Sundar Pichai of Google, Dara Khosrowshahi of Uber and Chuck Robbins of Cisco also tweeted their opposition to the policy.

The stories and images of families being separated at the border are gut-wrenching. Urging our government to work together to find a better, more humane way that is reflective of our values as a nation. #keepfamiliestogether

Must end cruel policy of separating accompanied minors from their parents – simply un-American. We need policies that reflect our values and do what’s right for society. @Cisco @BizRoundtable #KeepFamiliesTogether https://www.businessroundtable.org/media/news-releases/business-roundtable-statement-immigration … 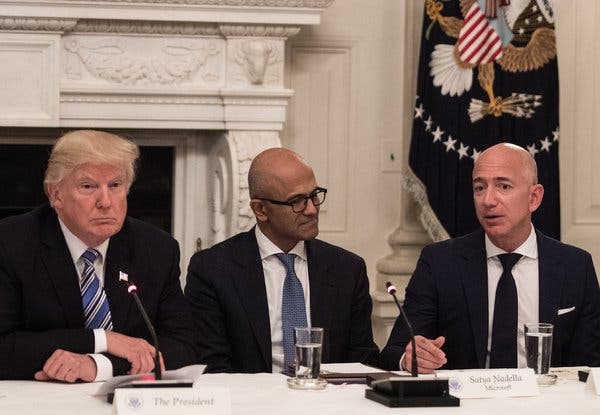 On Facebook, two former employees of the social network started a fund-raiser on Saturday to collect $1,500 for migrants who needed legal assistance because of the new policy. By Tuesday afternoon, the effort had garnered more than $5 million from donors who included numerous tech workers, according to a spokeswoman for the fund-raising drive.

Among the donors were Facebook’s chief executive, Mark Zuckerberg, and its chief operating officer, Sheryl Sandberg, a Facebook spokesman said. In a Facebook post on Tuesday, Mr. Zuckerberg called for more donations and said the policy of splitting up immigrant children from their families needed to be stopped. Ms. Sandberg, in her own Facebook post, called the cries of the children taken from their parents “unbearable” and added that the practice “needs to end now.”

The activity by tech workers is reminiscent of protests in January 2017when many Silicon Valley employees were up in arms over an executive order from President Trump that suspended immigration from seven mostly Muslim countries. At the time, Google employees held rallies to object; Amazon and Expedia were among the companies that filed in court to stop the order. (Many tech companies comprise workers who are first-generation immigrants or who grew up in immigrant families.)

Since then, tech workers have watched their companies increasingly come under scrutiny for their moral and ethical behavior. Many tech employees have begun organizing against actions by their own companies — in April, for example, thousands of Google employees signed a letter protesting the company’s involvement in a Pentagon program that uses artificial intelligence in weaponry.

On Monday, the A.C.L.U. also demanded that Amazon stop selling a facial recognition software tool, called Rekognition, to police and other government entities because it feared it could be used to unfairly target immigrants. Amazon did not immediately respond to a request for comment.

Microsoft, based in Redmond, Wash., publicly promoted its work with ICE in January in a blog post, citing it as an example of the success of its technology.

At the same time, Microsoft has been positioning itself as tech’s moral leader. Mr. Nadella and Mr. Smith have publicly said they want to protect user privacy and establish ethical guidelines for new technology like artificial intelligence.

“We need to ask ourselves not only what computers can do but what computers should do,” Mr. Nadella said at Microsoft’s developer conference last month.

Some Microsoft executives earlier objected to the Trump administration’s new immigration policy. On Sunday, Mr. Smith penned a LinkedIn post, saying the news of migrant children being taken from their families was “especially poignant.”

Yet criticism of Microsoft’s work with ICE began to grow. One Microsoft engineer, Larry Osterman, tweeted on Monday to ask how working with ICE matched with the company’s “ethical stances.”

Mat Marquis, an independent developer who works with Microsoft, also said in a tweet on Monday that he no longer planned to work with the company because of its ICE contract. When he receives his last payment from Microsoft, he said, he plans to donate the money to a group providing support to families that had been separated at the border.

Late Monday, Microsoft issued a statement saying that it was not working with federal agencies to separate children from their families at the border and that it was not aware of its services or products being used for that purpose. It also said it was “dismayed” by the immigration policy and urged that it be changed.

But for many Microsoft employees, that was not satisfactory. A group of about a dozen employees began working together to draft the protest letter, in which they said the company’s statement “does not go far enough.”

The employees continued, “We are providing the technical undergirding in support of an agency that is actively enforcing this inhumane policy.”

The letter added that Microsoft should not only cancel its contract with ICE but be open to a review of its contracts with government agencies domestically and internationally, and that it should create a policy stating it would not work with those “who violate international human rights law.”

Microsoft declined to comment on the employee letter, which was posted internally on Tuesday afternoon. Within hours, it had received more than 100 signatures.