December 15 – Today from 3:30 to 5:30 PM, the Portland City Council will vote on whether to place Wells Fargo and Caterpillar on the City’s Do Not Buy list (DNBL), asrecommended by the Socially Responsible Investments Committee (SRIC). The Portland Prison Divestment Coalition–convened by Enlace and representing 23 local leading racial and migrant justice organizations–and Occupation-Free Portland, will gather with community leaders and clergy at City Hall to demand the city align its investments with its values, by adding Caterpillar and Wells Fargo to the DNBL.

On November 30, supporters of the SRI policy filled City Council chambers and two overflow rooms in the first City Council hearing on the policy. Speakers representingPortland’s Human Rights Commission, Unite Oregon, the the McKenzie River Foundation, many clergy members, and community voices from the Palestinian and Jewish communities, communities of color, and immigrants, spoke of the harsh impacts of these two companies. Testimony is viewable here; photos are viewable here.

Wells Fargo is one of the principal financiers of the private prison industry. Private prison companies use the bank’s credit to expand and lobby for increased criminalization and incarceration which disproportionately impacts Black and Brown communities. Wells Fargo’s financing institutions with a well documented history of human rights abuses coupled with their investment in the Dakota Access Pipeline and their fraudulent account scandals place Wells Fargo in violation of Portland’s SRI criteria. Multiple cities and states like Chicago, California, Massachusetts, and Minneapolis are cutting ties with the bank. Earlier this week, the Seattle City Council unanimously voted to advance legislation that would ensure the city breaks ties with Wells Fargo.

The SRIC found that Caterpillar violates six of the seven SRI policy criteria.  Caterpillar’s human rights violations include: use of their militarized bulldozers to demolish Palestinian homes, lands and infrastructure; environmental concerns due to contracts to build the Dakota Access Pipeline and environmental degradation from mining and dam construction with Caterpillar equipment in Central America; tax avoidance; anti-labor practices; weapons manufacturing; and violations of corporate ethics for refusing to engage with church and human rights groups about the manufacturing and use of their their products to violate the human rights of Palestinians.

This is a critical moment in our nation’s history. As vulnerable communities organize in anticipation of the incoming Trump administration, there is the need for bold local leadership to stand firmly in speaking out against practices that trample human rights, corporate ethics, and desecration of the environment. We encourage City Council members to uphold the SRIC recommendations and place Wells Fargo and Caterpillar on our City’s Do Not Buy List.

AMANDA AGUILAR SHANK, Deputy Director, Enlace – “Incarceration and detention are increasingly a system that reaps huge profits for investors and CEOs at our communities’ expense. Shamefully, Portland is one of the investors reaping benefit from this through investments with Wells Fargo. In the Trump era, we urge the City Council to do what is needed by our vulnerable communities and cut its complicity with companies that are violating the dignity of human beings”

REV. DIANE DULIN, coalition member, Occupation-Free Portland – “Portland has the opportunity to be a national model in socially responsible investing. We urge our elected leaders to uphold the SRI policy recommendations and stand on the right side of history. It is time for a bold decision to align our city’s investments with practices that respect human rights, workers’ rights, and environmental rights. We urge City Council members to listen to their constituents, and uphold the recommendations set forth by the City Council appointed SRIC committee.”

AUDREY ALVERSON, Vice Chair, Portland Human Rights Commission – The Human Rights Commission (HRC) would like to acknowledge, ‘Impacts on Human Rights’ as one of the criteria by which the Socially Responsible Investments Committee evaluates city investments. The HRC voted to endorse the resolution that was brought to us last year to place Caterpillar on the DNBL. Today we reaffirm that decision. We did not examine or reach that decision from a political lens, but rather from a human rights lens—one that stipulates that human rights should be granted for all people regardless of their politics, nationality or religion.”

ROBERTA PHILLIP-ROBINS, Executive Director, McKenzie River Gathering Foundation – “What we choose to invest in is a statement of our values. Our city should use public tax dollars responsibly as a mechanism to achieve social justice. City leaders are entrusted to be good stewards of the public dollar.”

ROMEO SOSA, Executive Director, Voz – “Private prisons are damaging the immigrant community, and the city is a direct part of the problem. We don’t want to see our city involved in that kind of dirty industry. The City of Portland should set an example for other cities that should not tolerate the human rights abuses that happen in detention centers.”

ALI PULLEN, delegate to Standing Rock – “By investing in Wells Fargo, along with other banks and Caterpillar, the City is giving its consent for the purposeful displacement of indigenous communities, incarceration, and for a corporate oil company to desecrate sacred Native burial grounds and use excessive police brutality on our First Nations People. When investment decisions affect the drinking water of 17 million people, it will not only affect these vulnerable native tribes, it will impact our local community. What happens at Standing Rock affects all of us.”

KIMBERLY McCULLOUGH, Legislative Director, ACLU of Oregon – “The ACLU of Oregon fights to keep prisons, jails, and other criminal justice functions democratically accountable to the public and directly controlled by public officials, not for-profit companies. Please join us by making Portland a leader in the movement to divest from companies that profit from incarceration.” 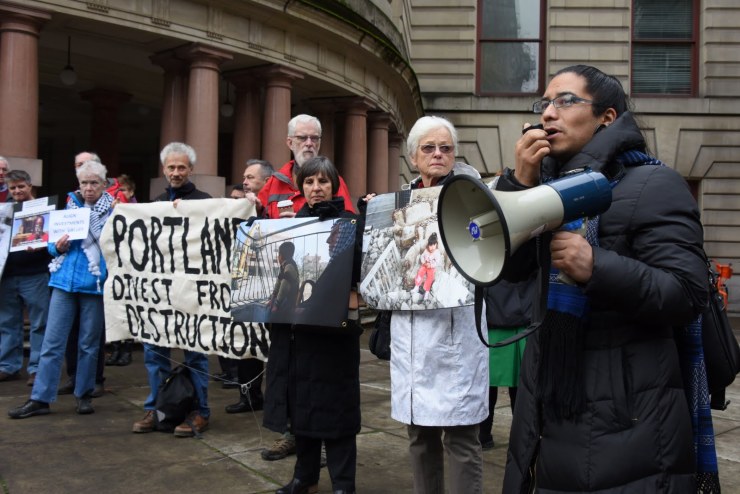