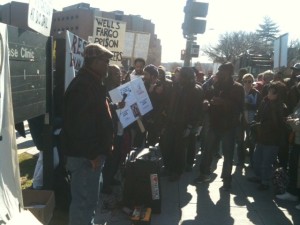 Occupy D.C.’s Criminal Injustice Committee and other organizations participated in National Occupy Day in Support of Prisoners, where people from around the country protested in front various jails and prisons around the country. In the District of Columbia, nearly a hundred people protested outside the D.C. Jail.

Their reasons varied from mass incarceration and overcrowding to police brutality and prison’s profiting off those incarcerated.  Video visitation is one of the primary reasons many were protesting.  The D.C. Jail has been installing video visitation devices.

One of the Occupy D.C. organizers said, “The American criminal justice is filled with injustice.  We incarcerate more people than any where else in the world.  The justice system has destroyed families and continues to unravel communities.  They’ve been incarcerating our black and brown people for a long time, now they want to take away the right to have a face-to-face visit.”

Zachery Sims was passing by after trying to see his son at D.C. Jail.  He saw the group of protesters and asked to speak.  He said, “My son has been charged with Murder One.  I just went to the jail to see him.  But what makes me mad is I went down to the D.C. City Council and asked them for help.  I asked them to do something for my son; to get him in a program or something to help me control my son.  They totally disregarded me and what I was saying to them, and then later on he come up charged with Murder One.  Now they tell us you can’t discipline these kid no more – you can’t hit them or touch them in any kinda negative way…I’m a ex-convict myself.  I’m on parole til 2020, if I try to discipline him, I’m getting locked up.  I can’t be a parent, and they won’t take do anything to help me.  I don’t know if he’s guilty or not, but the bottomline is I went for help before all this, and they just disregarded me.”

Someone in the audience yelled, “Vote the bums out!”

“Say no to video, face-to-face is the way to go,” said Debra Rowe, Executive Director of Returning Citizens United.  “The renovation of the facility where D.C. Jail is going to conduct their video visitation stuff is going to cost the city millions of dollars.  The city could instead use the money to improve the environmental and sanitary conditions at the jail.  They could upgrade the phones in the jail or the location where face-to-face visits are allowed.  The director has said to two different groups that one of the reasons they are doing this is because visitation can’t be done on the weekends and holidays because of staff shortages.  If they are going to pay someone to handle video visitation, then why not use that money to pay staffers on weekends and holidays?  These are our own local leaders making these decisions – our own politicians doing this to our own people.”

Phil Fornaci, who leads the DC Prisoner’s Project for Washington Lawyers’ Committee for Civil Rights and Urban Affairs, said, “There are too many people inside the DC Jail.  The prison is so crowded that they are sending people to Northern Neck because there isn’t room in the jail.  People are making money off of the backs off the incarcerated.  People are housed here illegally, then shipped to a place like Rivers Correctional.  There is money to be made by Wells Fargo and organizations like GEO.”

Video conferencing is looked at as a useful tool to connect with people in distant locations, but many protesting on President’s Day believe using video conferencing in prison is damaging the human connection for inmates.  Under face-to-face visitation, inmates are transferred from their housing area to the visitation area, while visitors often had to walk through the facility. With video visitation, inmates will use a video visitation station located in their cell or cell block, while visitors can use a corresponding station elsewhere–or even use their computers from home.  Video visitation by design eliminates the public from having direct contact with inmates, and this is what’s sprouting up in D.C.

The concept has grown across the country.  In Pinellas County, Florida (located across the bridge southwest of Tampa Bay), all visitation is electronic.  The Sheriff’s Office also has a mobile visitation program, which began in 2009, and allows communication between the public and the incarcerated via a high-tech bus that is outfitted it with six laptops that are equipped with video-conferencing software, all for under $62,000. The program averages a cost of $50,000 annually.  To video chat with an inmate, county residents register in advance for a 40-minute time slot. Each week, the bus visits four cities located within the county, reducing the number of people using the jail’s onsite visitation facility.

“I thought if we could reduce the demands of our inmate visitation — at the video visitation at the jail complex — and put it out in the community, it would help relieve the demand for services at the complex for video visitation,”  Pinellas County Sheriff Jim Coats said.  Additionally, county officials have said it benefits inmates and their families because an estimated 80 percent of the county’s inmate population is pretrial detention (similar to D.C. Jail) and inmates and the family members can talk via video visitation.

Video visitation is also used at Keen Mountain Correctional Center, a Virginia prison close to the Tennessee border. The  Video Visitation Program is often used for the rural state prison.  The Old Presbyterian Meeting House in Alexandria is listed as a location for family members to go for visitation.  The Richmond-basedAssisting Families of Inmates (AFI) runs the program with the Virginia Department of Corrections and this option gives inmates an incentive to behave behind bars and improves their chances of long-term success on the outside, officials said.  The hour-long video chat costs $30.

Why is video visitation growing?

1.  Lowering recidivism
A prison official said, “It’s widely known that recidivism is decreased when inmates have stronger networks and connections with family.”  Ada County Jail, located in Boise, Idaho, says they have had a reduction in re-arrests.  Visitations have increased from three days per week to seven days per week. An official with the jail says that inmates are building stronger connections with a wider variety of (agency approved) family members and friends.

3.  Increased Security
Many of the ways inmate video visitations increase security are obvious; if inmates have less direct contact with outsiders, contraband risks are diminished, and greatly reduce the day to day burdens on staff.

“People need to understand that losing that family connection, that face-to-face, even if it is plexi-glass,” said Dougan, one of the protesters, “we need that to successfully reintegration into the District.”

Mary Stafford, a returning citizen said, “When I was locked up, seeing my family face-to-face meant something to me.  These people here at the jail have to know that keeping that connection is important.  If one of those jail officials was doing time behind bars, they would be crying about not getting that chance to see their family in the flesh.”

DLLB said, America is undertaking a social experiment never before attempted ANYWHERE in the world. We are now keeping more than 1% of our adult population in prison on any given day. No other country does this. America now has a prison population of 2,500,000 people — five times as many prisoners as we had in 1970.Most people sitting in American prisons tonight aren’t even violent offenders, let alone murderers. And, after their sentence is served, they *will* be back in the community. Would you prefer that they come back with strong family ties, or without?

Another said, So, it’s nice that we have initiatives to keep prisoners connected with their families, the REAL reform we need is to bring our incarceration rate back down to First World norms. Because, to foreign eyes, our entire criminal justice system looks like a draconian and barbaric aberration.

BettyLou4U said, This is just another ridiculous liberal sob story about the sad plight of poor, pitiful criminals and the society that fails to appreciate their diversity.

Capitol Hill resident Aubrey Dawson said, “People go to jail because they broke the law.  The law doesn’t care if you’re black or white…it only cares if you’re wrong or right.  People that disagree with video visitation doesn’t have all the facts.  They need to become informed before they go out and block traffic and cause problems.  Installing video conferencing is going to benefit the inmate.”

“Say No to the New Jim Crow” is the message that reads on the Occupy4Prisoners Facebook page.