The GEO Group, Inc. (GEO) is the second largest for-profit private prison in the United States operating in 17 states. GEO has federal and state contracts to manage maximum, medium and minimum security prisons; immigration detention centers; and the transportation of prisoners. GEO also has an exclusive contract with the U.S. Immigration and Customs Enforcement (ICE) to provide supervision and reporting services for non-detained aliens in the immigration court system. Over the last ten years, GEO’s consolidated revenue has grown from $517 million in 2002 to $1.5 billion in 2012. In 2013, GEO Group and CCA successfully qualified as Real Estate Investment Trusts (REITs) under lax IRS guidelines; this classification allows both companies to dodge income taxes. 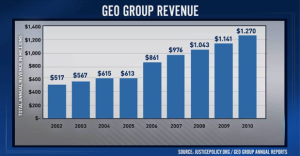 The GEO group has been responsible for human rights violations at many of their facilities.  On April 2012, the Southern Poverty Law Center, the American Civil Liberties Union, and attorney Robert McDuff brought a class action lawsuit on behalf of 13 youth incarcerated at Walnut Grove Youth Correctional Facility in Mississippi. Plaintiffs alleged that guards smuggled drugs to inmates, had sex with some of them, and denied others medical treatment and basic educational services. In the midst of the litigation, the U.S. Department of Justice investigated the facility and released a report confirming many of the plaintiffs’ allegations, stating “systemic, egregious and dangerous practices.”  Days after the DOJ released the report, the State reached a settlement with plaintiffs in the form of a consent decree. Federal Judge Carlton Reeves approved the settlement, finding that: “WGYCF has allowed a cesspool of unconstitutional and inhuman acts and conditions to germinate…”

Although Mississippi ended their contract in July 2012, conditions in other GEO locations, including immigrant detention centers, have not improved; there are many stories of mistreatment and inhumane practices.

In the 2012 GEO shareholder meeting, GEO Group had the opportunity to vote on a resolution proposed by the Dominican Sisters and The Mercy Investment Services, Inc. to address these issues:

“Mercy Investment Services is engaging with GEO Group on human rights policy. We recommend that the policy be framed in the context of the Universal Declaration on Human Rights and we suggest GEO use the United Nations Guiding Principles on Business and Human Rights as the standard as it reviews existing policies,” says Sister Valerie Heinonen, Director of Shareholder Advocacy. “We also believe a [third-party] audit independent of its government regulators should be done to ensure compliance with best practices, not minimal standards, in all of the facilities managed by GEO.”[iv]

The shareholders did not approve the proposal even while the news of the Mississippi abuse was in all the major television networks. However, the resolution won enough votes to be introduced again at the next shareholder meeting.

“Public resistance to privatization of correctional, detention, mental health and residential facilities could result in our inability to obtain new contracts or the loss of existing contracts, which could have a material adverse effect on our business, financial condition and results of operations.”