As controversy over President Donald Trump’s immigration detention policies continues to rage, Charlotte’s two big banks have found themselves swept up in the strife.

Bank of America and Wells Fargo are among the banks that do business with two firms that manage immigration-detention facilities. Those firms, Tennessee-based CoreCivic and Florida’s GEO Group, are publicly traded companies and the largest private-prison operators in the U.S.

It’s that connection which has made the banks targets of activists demanding they sever those ties. As recently as last week, demonstrators entered the uptown Wells Fargo branch at Tryon and Third streets to deliver a letter of protest.

The critics argue the banks are playing a role in separating immigrant families as well as benefiting financially from prison firms whose business model involves detaining immigrants.

“Our message to those people, to those banks, is stop financing hatred,” said Héctor Vaca, of Action NC, a nonprofit that organized Charlotte protests this year, including last week’s, to call attention to the banks’ financing. Last week’s letter, which was also addressed to JPMorgan Chase, was signed by more than 100 groups.

CoreCivic, based in Tennessee, and Florida’s GEO Group, own and manage immigration detention centers across the U.S. They also have other businesses, such as owning and managing correctional facilities.

This summer, the banks’ connections to the companies ignited protests in several U.S. cities. 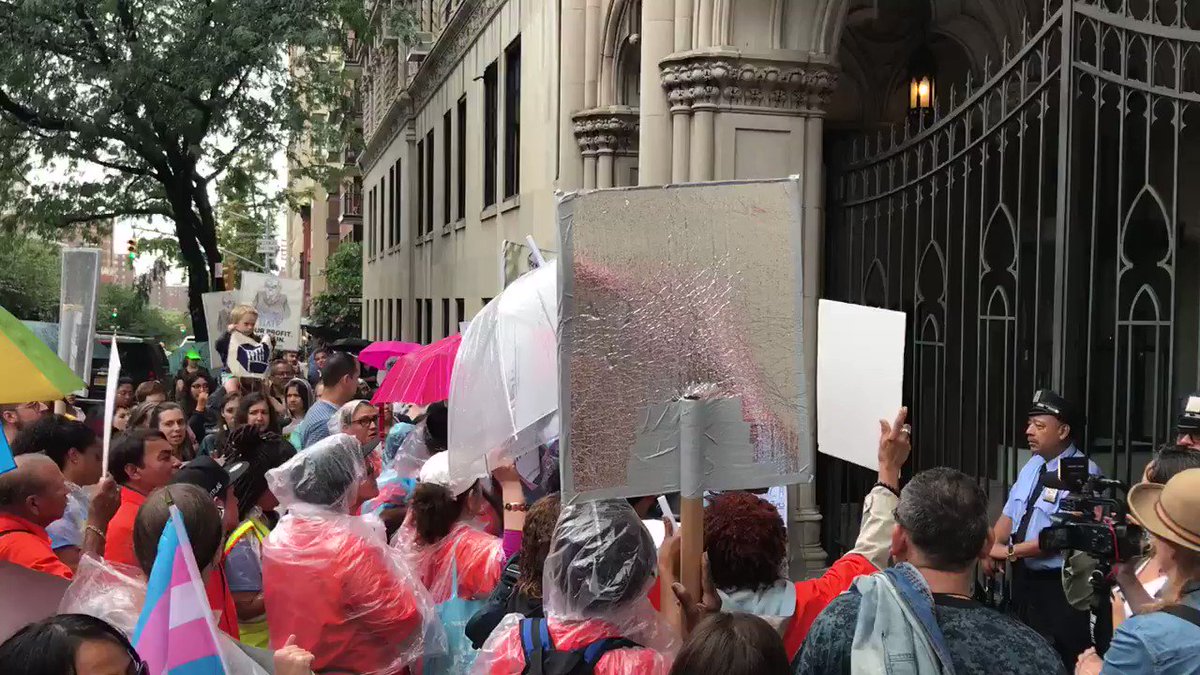 Happening now: Immigrants and activists outside of the condo of @Chase CEO Jamie Dimon playing the recordings of the children from detention centers demanding that they stop financing hate #BACKERSOFHATE #FamiliesBelongsTogether @MaketheRoadNY @CPDAction 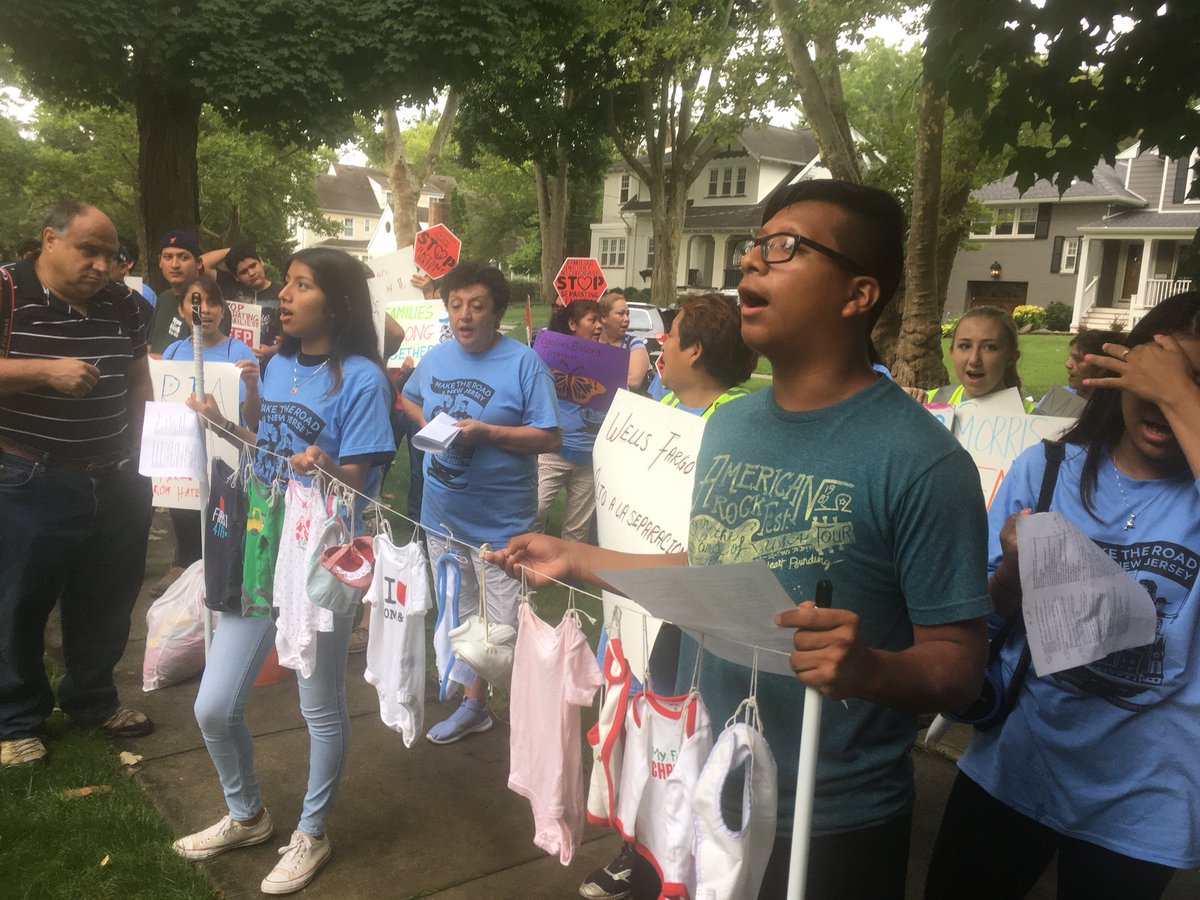 We are here at the home of @WellsFargo board of directors member María Morris demanding an immediate end to financing of private detention centers. #familiesbelongstogether #BackersOfHate

Bank of America, Wells Fargo and other banks have provided various services to CoreCivic and GEO Group in recent years, Securities and Exchange Commission filings show. The list can vary by bank but includes hundreds of millions of dollars in loans, as well as arrangements to sell shares of the prison companies’ stock.

It’s not known, though, how much money the banks have made off such deals.

Scrutiny of banks’ connections to CoreCivic and GEO Group predates the Trump administration. But attacks on the banks have escalated under Trump, whose stepped-up immigration enforcement will likely mean more business for both firms, critics say.

In a statement, CoreCivic said much of the information about the company being shared by special interest groups is wrong and politically motivated.

The company noted it is subject to multiple levels of oversight and that there are more than 500 U.S. Immigration and Customs Enforcement officials assigned to its eight ICE-contracted facilities. It also said it has done business with every administration in Washington, D.C., for more than 30 years.

“Our sole job is to help the government solve problems in ways it could not do alone — to help manage unprecedented humanitarian crises, dramatically improve the standard of care for vulnerable people, and meet other critical needs efficiently and innovatively,” CoreCivic stated.

In a statement, GEO Group said that calls for banks to no longer do business with it are misguided and “based on a deliberate mischaracterization of our role as a long-standing service provider to the government.” The company added that it plays no role in setting criminal justice or immigration policies, and has never argued for or against such policies.

Criticism of the banks’ dealings with the companies has been boosted by the Trump administration’s “zero tolerance” practice of separating migrant children from their parents attempting to enter the U.S.

Trump, facing fury over photos of crying children inside chain-link pens, signed an executive order in June ending the separations.

CoreCivic and GEO Group emphasized that their facilities do not house minors without their parents. But investors have been optimistic that the companies will benefit from the order by housing more families.

Share prices of the companies have dwarfed gains of the major stock indexes since Trump’s 2016 election.

Héctor Vaca, of Action NC, speaks in front of other protesters outside of Bank of America’s Charlotte headquarters in July. The protesters gathered to criticize Bank of America and Wells Fargo for doing business with two large private prison companies that house illegal immigrants.
Photo by Deon Roberts

Critics say banks are playing a role in family separations by virtue of giving loans and other funding to private prison companies that operate detention centers.

A 2016 report by In The Public Interest, a California-based government watchdog group, called on banks to cut ties with private prison companies, accusing them of widespread human rights abuses.

The report, “The Banks That Finance Private Prison Companies,” named Wells Fargo, Bank of America, JPMorgan, BNP Paribas, SunTrust and U.S. Bancorp as having played large roles in financing the companies over the past decade.

By doing business with CoreCivic and GEO, “the banks are complicit with the private prison companies in contributing to and enabling mass incarceration and the criminalization of immigration,” the report said.

In one deal announced in August, CoreCivic said Bank of America’s Merrill Lynch unit is among four firms able to sell up to $200 million in CoreCivic shares the company might offer. The firms, which include SunTrust Banks and Fifth Third Bancorp, could receive up to 2 percent commission from any sales, according to the agreement.

CoreCivic intends to use substantially all of the proceeds to pay debts or for working capital and other general corporate purposes, which may include investments, the agreement said.

“We understand there are important issues being raised, and we encourage the discussion among the companies, government officials, and affected communities to address them,” Charlotte-based Bank of America said in a statement. The bank said it does not hold any CoreCivic or GEO Group stock.

Wells Fargo, which is based in San Francisco but has a big presence in Charlotte, is trustee on $350 million in bonds issued by GEO that will mature in 2026, securities filings show. GEO’s plans for the proceeds involve general corporate purposes, including repaying a line of credit, according to the filings.

Wells Fargo said it doesn’t comment on customer relationships. But in a statement, it also said it doesn’t own any CoreCivic or GEO stock, sit on either company’s board or dictate their policies or business.

“Wells Fargo respects the seriousness of our country’s ongoing debate about the immigration and the criminal justice system, but we do not as a corporation take positions on public policy issues that do not directly affect our company’s ability to serve customers and support team members,” the bank said.

CoreCivic, in its statement, said it operates safe and humane immigration facilities.

GEO Group said it’s proud of its record of managing facilities in safe, secure and humane environments and that it strives to treat everyone in its care with compassion, dignity and respect.

While Bank of America and Wells Fargo haven’t disclosed plans to limit their dealings with CoreCivic and GEO, the banks this year have announced steps they’ve taken in response to another politically charged topic: mass shootings.

In March, Wells Fargo CEO Tim Sloan told the Observer the bank was in talks with gunmaker clients following a deadly shooting in February at Florida’s Marjory Stoneman Douglas High.

In April, a Bank of America executive announced it would no longer lend to manufacturers of military-style guns sold for civilian use, as a way to help address mass shootings.

Banks have made those moves as large investors, such as pension funds, see a clear relationship between guns and mass shootings, said Courteney Keatinge, of Glass Lewis, a prominent company that advises shareholders. But there’s less of a general understanding about how private prisons operate and profit from illegal immigration, said Keatinge, director of environmental, social and governance research at the firm.

Last year, the office of New York City Comptroller Scott Stringer said the city’s pension funds had fully divested from private prison companies, including CoreCivic and GEO Group. In a press release at the time, Stringer’s office said it marked the first major U.S. public pension system to make such a move. He cited reports of alleged human rights abuses across the industry for the decision.

In August, the American Federation of Teachers urged pension funds to pull investments they might have in about two dozen firms holding stock in private prison companies, including CoreCivic and GEO Group.

Meanwhile, front-line bankers are organizing to get banks to do less business with private prison companies, said Kilian Colin, a member of Committee for Better Banks, a coalition of industry workers that pushes for better working conditions at banks.

The issue comes up in the committee’s conference calls and meetings, said Colin, a former Wells Fargo employee who was raised in Iraq.

“I’m an immigrant myself,” he said. “A lot of our members are people of color.”