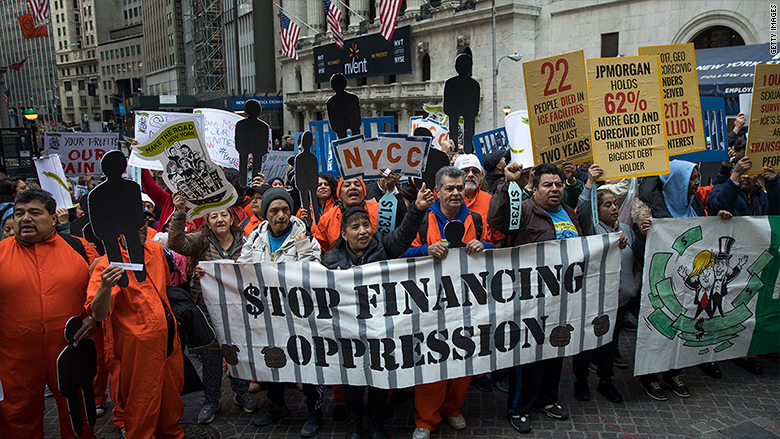 Protesters called on Wall Street to stop bankrolling private prisons at a May Day march in Manhattan.

(CNN)JPMorgan Chase, Wells Fargo and other banks have come under fire for helping to finance private prisons used by the federal government as immigrant detention facilities.

Eight people were arrested while protesting outside the New York City home of JPMorgan CEO Jamie Dimon on Wednesday and protesters gathered outside the home of a Wells Fargo board member in New Jersey on Tuesday. Activists including New York gubernatorial candidate Cynthia Nixon also rallied around the issue at a May Day march in Manhattan.
“Private prison companies and their Wall Street financiers stand to benefit from policies that increase detentions, separate families, and cause irreparable harm to immigrant children,” said Ana María Archila, Co-Executive Director of the Center for Popular Democracy, in a statement.
A report from the group shows that JPMorgan, Wells Fargo and BlackRock have lent money to two big private prison companies, CoreCivic and GEO Group, and held millions of dollars of their debt as of March 2018.
Four other advocacy groups, all part of the Corporate Backers of Hate campaign, helped write the report, which cites data from Bloomberg.