Via The Nation | Michelle Chen 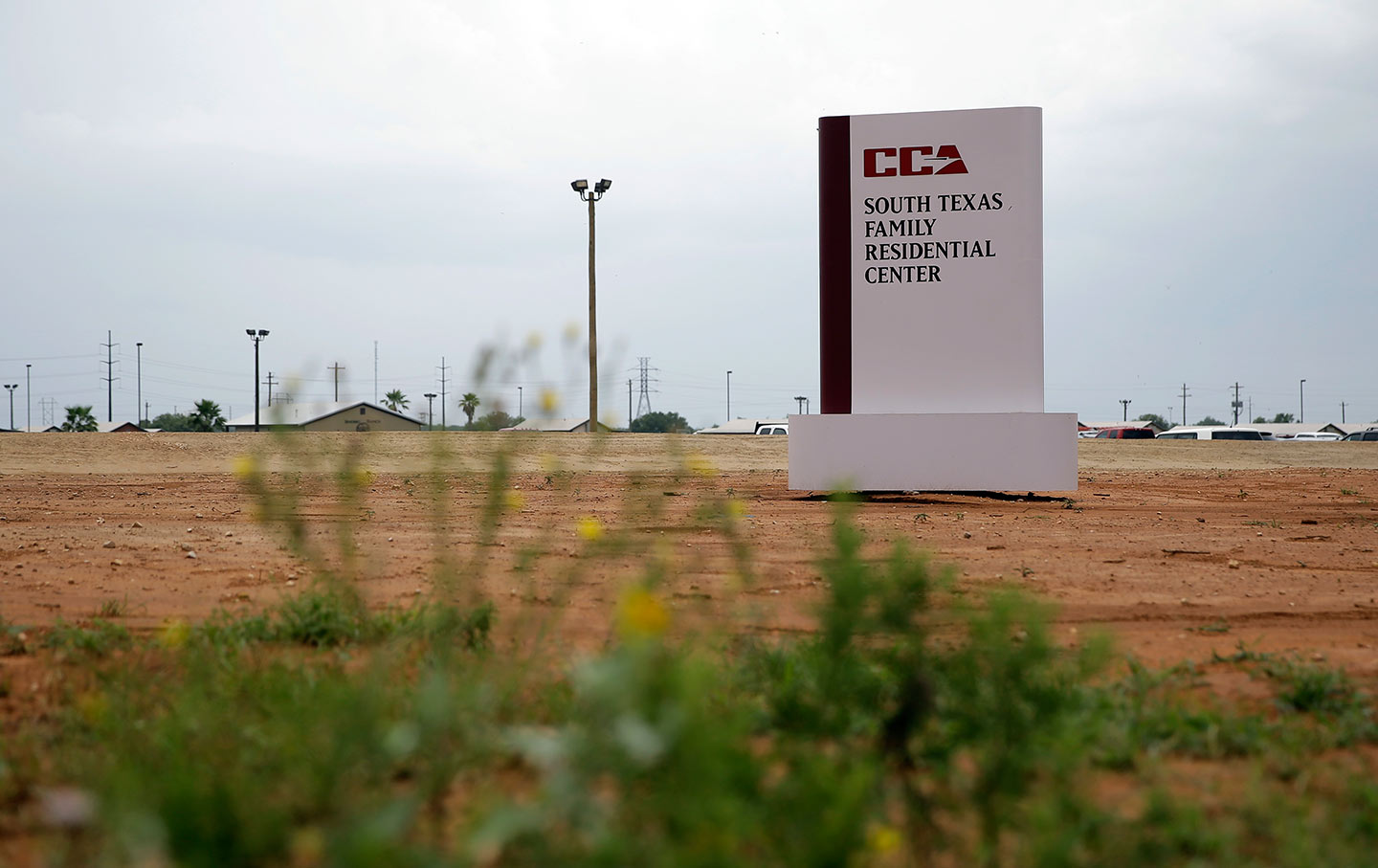 There’s a new tactic in the battle against ICE’s detention network: Defund the private prison companies that operate these facilities.

The movement for divestment from the detention-industrial complex will not in itself alter the Trump administration’s increasingly aggressive anti-immigrant policies. But a campaign to target two massive corporate prison contractors, CoreCivic and GeoGroup, through their chief creditors, Wells Fargo and JP Morgan, demonstrates the crucial link between the banking system and government investment in immigrant jails.

“These financiers…are essential to the business model of what is effectively a morally bankrupt industry,” says Daniel Altschuler, Director of Civic Engagement and Research for Make the Road New York. The group is part of a coalition of more than 70 organizations, including the ACLU and National Domestic Workers Alliance, that demands that Wells Fargo and JP Morgan stop financing the massive network of privately run ICE facilities.

Wall Street firms are leading financiers for not just prisons but other morally shady enterprises, ranging from weapons manufacturing to the toxic debts sinking Puerto Rico’s economy. But immigration is a particularly promising investment prospect under the Trump administration, with the flow of contracts closely tracking the right-wing turn in the politics of the border.

Toward the end of the Obama administration, there had been some efforts to sever federal contracts with private prison companies. But President Trump has drastically inflated both the number and capacity of detention facilities, while migrant families at the border are being automatically detained and ICE raids in immigrant communities are leading to mass arrests and detentions. ICE detention investments have subsequently soared.

In recent months, several fresh federal contracts have been issued for private facilities designed for the mass incarceration of detainees in Texas, and CoreCivic’s federal contracts have exploded by more than 900 percent. Altogether ICE now has enough beds to warehouse about 34,000 people per year. Detentions are primarily administered through private prisons, which have also been linked for years to scandals and lawsuits involving depriving detainees of medical care, abuse of transgender migrants, and other human-rights violations.

Meanwhile, a study by Enlace, Make the Road, and other groups calculates that “JPMorgan, Wells, and BlackRock’s number of shares in the private prison and detention industry have collectively increased 28.3 times…driven mainly by JPMorgan and BlackRock, whose reported holdings increased 237.8 times.” Moreover, the companies simultaneously capitalize on loopholes in so-called Real Estate Investment Trusts, to shield their detention-industry assets from corporate taxation. According to the analysis, this obscure tax break is one of many benefits that result after “Private prison companies have spent millions lobbying Congress and making campaign contributions to protect their profits.”

The booming industry is highly leveraged, with about 90 and 95 percent of CoreCivic and GeoGroup’s finances, respectively, held in the form of debt through Wall Street loans that collectively provided $217.5 million in interest payments to shareholders last year.

The investment triangle of ICE, Big Finance and prison corporations is at odds with the lofty “corporate social responsibility” rhetoric that Wall Street CEOs have put forward about immigrants. JP Morgan CEO Jamie Dimon, for example, has lauded the Dreamers, the youth who qualify for temporary deportation reprieve under the Obama administration’s DACA program, for representing the “best and brightest” members of the American workforce, and advocated a “pathway” toward permanent legal status. But with hundreds of thousands of Dreamers soon to face deportation as their protections expires under a White House directive, about 70 percent could soon headed to private detention centers—with Wall Street paving a path to exile instead of citizenship.

So in contrast to the image of the banking industry as a good corporate citizen, Altschuler says, “We believe that these private prison companies are an increasingly toxic sector of the economy. We believe that they should not exist.” Make the Road acknowledges that divestment campaigns might be offset if the industry can just attract new investment sources, but he argues, “We believe that…these funds, whether it be a Wall Street fund, whether it be a municipal pension fund, should not be investing in this sector. And then over time, people will understand the reputational risk that they have by being party to this sector.”

The American Federation of Teachers, which also recently cut ties with Wells Fargo because of its support for the gun industry, sees divestment as a platform for labor to wield its economic clout through its members’ resources. The aim, according to AFT President Randi Weingarten, is to “try to create a virtuous cycle—investing in prudent and responsible ways to create good jobs, ensure retirement security and boost sustainable returns to make Wall Street work for Main Street and working families.”

While immigrant-rights advocates will continue to pressure the government to overhaul the entire immigration policy regime, targeting the powerful Wall Street financial firms that control the prison industry’s debt financing targets the economic backbone of the prison industry, and for communities, linking the realm of finance with the system of mass incarceration raises public consciousness about the need for real accountability in the financial infrastructure.

As the demand for a comprehensive immigration overhaul grows, the prison divestment campaign seeks to demonstrate the economic leverage that ordinary consumers, workers, and universities can wield when they seek integrity and accountability in the way capital interacts with public institutions and communities. In addition, Enlace and other grassroots organizations are pushing for community reinvestment along with divestment, including the establishment of a public bank in New York City to create a financial alternative to placing funds in financial firms linked to the prison system.

“It’s also about disrupting the narrative that safety equals more people in prison, more people deported,” says Enlace Executive Director Daniel Carillo. “What if government was investing more in young people and different programs to push jobs, instead of increasing the police force or increasing militarization?”

Politically conscious divestment is just starting to change the balance sheet of democracy: underwriting “security” not through mass imprisonment, but community emancipation.