But advocates want detainees freed, not sent to for-profit jails 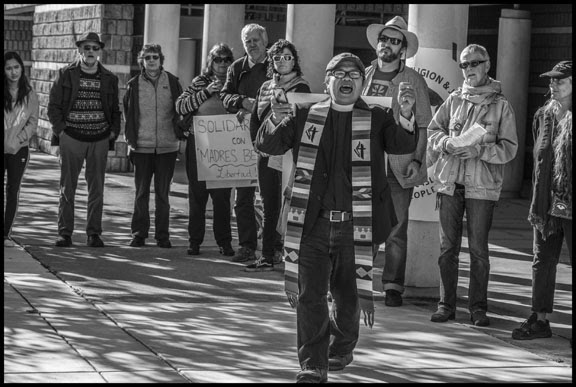 The Reverend Izzy Alvaran, who gained asylum from the Philippines a decade ago, leads protesters in a chant outside the detention center.

Most Latina teenagers celebrate their a quinceañera, or 15th birthday, with parties and dances. Sometimes their families even rent a hall and hire a band. On June 9, Alexa Lopez, dressed in a pink tulle gown, held her quinceañera outside the West County Detention Center in Richmond, California. Her father, Raul, had been locked inside for a year and a half.

The celebration, organized with the help of the Interfaith Movement 4 Human Integrity (IM4HI), was in part an effort to help Alexa feel that, despite her family’s separation, she was surrounded by a community that understood the importance of that day. But it was also a way to show to the larger world the terrible cost of immigration detention and family separation.

Perhaps that was one element convincing Contra Costa County Sheriff David Livingston to announce, a month later, that he was canceling the county’s contract to house immigration detainees for the Immigration and Customs Enforcement (ICE) agency of the Department of Homeland Security. Detainees’ families and their supporters called that a victory, but only a partial one.

“While in the long view,” cautions Reverend Deborah Lee, IM4HI’s director, “ending Contra Costa County’s incarceration of immigrant detainees is a step towards ending immigration detention-and part of a growing trend of local municipalities to end contractswith ICE detention-the action by the sheriff is not yet a victory. It will not be a real victory unless current ICE detainees are released and reunited with their families.” 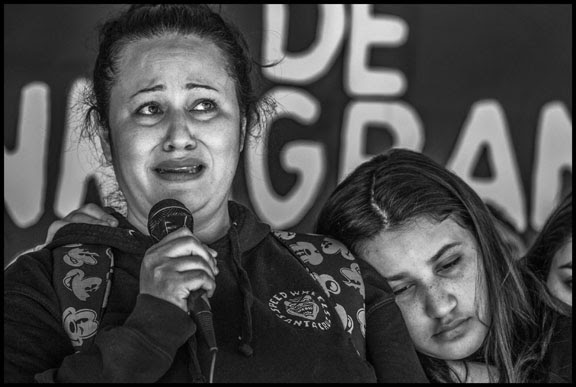 Lourdes Barraza speaks out in front of the detention center

The Contra Costa County cancellation is not unique. Several cities and counties have taken the same action in recent months, including Sacramento and Monterey Counties last month. Santa Ana, in conservative Orange County, voted in 2016 to phase out its ICE contract, leading ICE to simply pull out of the jail. Around the country, ICE contracts have been canceled in Springfield, Oregon, and Williamson County, Texas. In Alexandria, Virginia, just across the river from the White House, the Northern Virginia Juvenile Detention Center recently decided to stop imprisoning immigrant children.

Most cancellations have been motivated by public outrage over the Trump administration’s “zero tolerance” policy, under which every migrant crossing the border without papers is being criminally charged and held in detention centers. More than 3,000 children have been torn from their parents in this process. Thousands of other young border crossers, unaccompanied by adults, have been incarcerated as well.

The West County Detention Facility is housed in a much larger jail, one of four Contra Costa County criminal lockups. Its official capacity is 1,096 people, of whom 150 to 300 have been detainees in a facility run by ICE, which pays the county $3 million a year to use it.  Some immigration detainees have been held because ICE says they’re in the country illegally. Others have been asylum seekers detained on arrival in the United States or legal residents with past offenses (often very minor ones) that makes them deportable.

Detainees await a hearing before an immigration judge. That hearing, however, is not the normal courtroom procedure one might imagine. The judge sits in a room in the ICE building on Sansome Street in San Francisco. The immigrant sits in a room at the detention center in Richmond. The hearing takes place over the Internet. In the past week, demonstrators protesting the detention of migrants have occupied the street outside the San Francisco building. The decision in Contra Costa County, however, was not simply a reaction to the controversy of recent weeks. For seven years, IM4HI and its predecessor, the Interfaith Coalition for Immigrant Rights, have organized a monthly vigil outside the detention center doors. Churches, synagogues, and other religious bodies (most recently Zen Buddhists), as well as community organizations, have all taken turns bringing their members out. The gatherings usually number more than 100, and a recent rally, part of the national demonstrations against the detention of children, drew 3,000. Close to 10,000 people have come to the vigils, some more than once, and a few come every time.

“The vigils have been important because they made our community aware that the detention center was there,” says Reverend Lee. “We have a responsibility. We can’t say, ‘We didn’t know.'”

Several years ago, the faith-based network also began holding educational events in churches and organizing delegations to Mexico and Central America, in which faith leaders talked with activists about the root causes convincing migrants to leave home and risk detention, deportation, and family separation.

“For us, the vigils have been an organizing platform,” Lee explains, “an ongoing teach-in, and a chance for people to see who’s in this jail and talk to them about why they’ve come.”

Over the years, the vigils have provided activists a way to communicate with people inside the center and find ways to support them and their families. On one Saturday earlier this year on February 3, Lourdes Barraza and her daughters Sofia, Isabel, and Anna waited to hear news of her husband and the girls’ father, Fernando, who’d already spent three months inside. Reverend Pablo Morataya gathered members of the First Hispanic Presbyterian Church in east Oakland, a sanctuary congregation, as well as other pastors and lay ministers serving immigrant congregations throughout the Bay Area. They went to the detention center to hold a vigil for Fernando. “There are risks,” Pastor Morataya says, “but for us it is a calling of our faith.”

With that support, Fernando was freed several weeks later. Not long afterward, at a tribunal held in the shadow of the jail, Fernando and other former detainees told the story of their imprisonment, and community members testified in opposition to policies criminalizing migration. 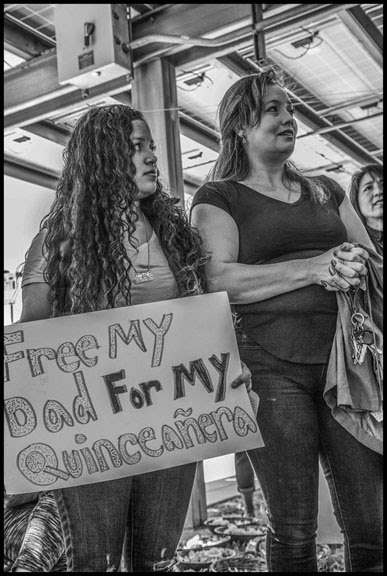 Alexa Lopez, her mom, and Reverend Deborah Lee outside the detention center

Encounters between faith activists and the families of detainees have often been very dramatic. During one vigil outside the detention facility three years ago, Paola (not her real name) was standing with supporters when she got a phone call from Florencio, her husband.  He was in another detention center in Arizona, calling to tell her that la migra (immigration agents) had caught him in the desert, walking north with a dozen others. She collapsed into the arms of a church member next to her, both of them weeping.

“I was there with people from the church who were helping us,” she remembers. “We’d been praying for people they knew who were inside, and we began singing. Then my cell phone rang.  I was so afraid of getting that call, because I knew what it would be. Then they were praying for me too.”

St. John’s Presbyterian Church in Berkeley had helped Paola apply for asylum, and was eventually able to get her husband out of detention. Activists refer to this support as “accompaniment,” a term that originated in the 1980s in efforts to protect activists in El Salvador from death squads. People showed their solidarity with those in danger by accompanying them physically. Today, accompaniment is part of the movement giving sanctuary to migrants.   Activists support a family by helping them find food and shelter, and getting them legal help. Sanctuary congregations have multiplied to 32 throughout the Bay Area.

“The West County Detention Center became a local symbol of a national problem,” Reverend Lee says, “but it is also a real place holding real people. We’ve been committed from the beginning, not just to protest the symbol, but to do what we can to know, to support, and finally to liberate the people inside. It’s not about self-interest. It’s about moral interest.”

The fate of the 169 people currently incarcerated in the center, however, is uncertain in the wake of Sheriff Livingston’s announcement canceling the contract. Instead of being released, as advocates have hoped, people are being transferred to other ICE jails. Raul, the father of Alexa Lopez, was taken to a facility in Colorado. “We can’t see him anymore,” his wife Dianeth told Lee.

In a statement, ICE spokesperson Richard Rocha said that the decision to cancel the contract would negatively impact local ICE operations, but would hurt detainees more. “Now, instead of being housed close to family members or local attorneys, ICE may have to depend on its national system of detention bed space to place those detainees in locations farther away, reducing the opportunities for in-person family visitation and attorney coordination.” 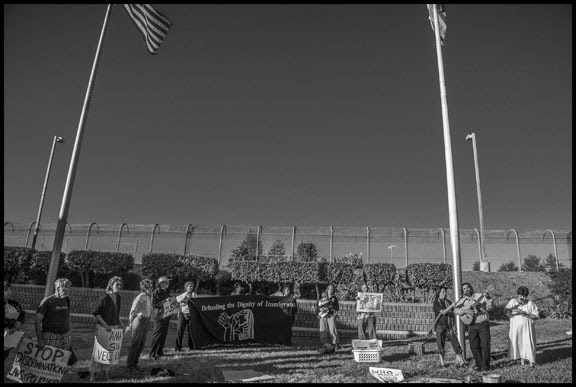 In 2011, people of faith began holding a vigil outside the West County Detention Center, where immigrants are incarcerated before being deported.

Immigrant rights activists call that a threat. “People can and should be released while they await for their asylum or deportation cases to proceed, so that they can be united with their families and more readily access legal counsel,” IM4HI said in a statement. “It is unnecessary for immigrants to be detained when humane, cost-effective alternatives exist.”

“Our ultimate victory is an end to immigration detention, not merely the closure of one facility,” the statement continued. “Victory will be the full release, not transfer, of ICE detainees and the return of those who have already been transferred out of state.”

Meanwhile, many people detained by ICE are taken to the sprawling, 2,000-person Adelanto ICE Processing Center in San Bernardino County, California. Since it opened in 2011, more than 73,000 migrants have been incarcerated there for at least some period. Five detainees have tried to commit suicide, three others have died, and detainees have mounted several hunger strikes in protest of terrible conditions. Adelanto is run by the Geo Group, Inc., which was formerly the Wackenhut security firm, and originally began as the Pinkerton anti-labor detective agency a century ago. ICE pays Geo $112 per day per detainee.

“While it’s a victory that we were able to get the contract canceled in Contra Costa County,” Lee warns, “there’s a great danger that we’ll see even more private prisons. We have to keep up the pressure, especially on places like Adelanto.”

After hearing the news of the impending closure of the immigrant detention center, the families of a dozen detainees and their supporters held a rally outside. Many broke into tears as they talked about the pain of separation, and their fears that they might not see their husbands or fathers if they’re transferred far away. They called on ICE to release the detainees on bond, or with an electronic ankle bracelet that allows ICE to monitor their whereabouts.

Dianeth said that she could live with the humiliation of the monitoring, or even paying thousands of dollars, if ICE would bring her husband back from Colorado and free him. “We want freedom for all the people who are detained,” she told the crowd in a trembling voice. “We want freedom so they all can come home.” 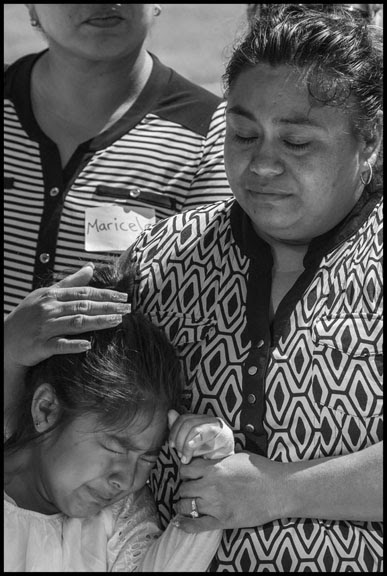 Soledad comforts her daughter, crying because she fears that if they transfer her father she won’t see him again.