At a gala fundraiser for the Florida Democratic Party in Hollywood on Sunday, party leaders including Chair Terrie Rizzo stood onstage and repeatedly condemned the Trump Administration for imprisoning immigrant children at detention facilities across the country.

But when a group of activists proposed a ban on all political donations from the private-prison companies who profit off Trump’s policies, a small but influential minority of old-guard party officials (and at least one former Clinton White House employee) fought back and nearly succeeded in killing the measure.

In the end, though, the resolution did pass by a large majority, ushering in a new era of anti-mass-incarceration activism at the party level in Florida.

The squabble illustrates an internal battle raging through the Democratic Party across the nation. As activists, many of themyounger Millennials, push the party to take the moral high ground on issues including prison reform and campaign finance, many older, more entrenched officials have fought back behind the scenes. The Florida Dems’ clash over prison cash also shows how grassroots activists are conflicting with establishment entities like the Democratic National Committee (DNC) and the Democratic Congressional Campaigns Committee (DCCC), which have both been accused of kneecapping progressive candidates.

“I think the whole thing was just a sign of the hypocrisy of the leadership of the party,” Rachel Gilmer, an activist with the Dream Defenders, says of the fight over the resolution. “The meeting opened with a quote from Representative Val Demings about how supporting the Democratic Party is the only way to save the country, and how we need to stand up against Trump’s family separation and hard-line immigration policies. But some people think it’s OK to speak out against such policies while at the same time being deeply in bed with a company that works with politicians to put more people in jail.”

The backlash against private-prison donations has gained traction in Florida thanks in large part to the Dream Defenders, who have been pushing Democratic candidates to refuse any money from the industry. During a debate last month, all four major Democratic candidates for Florida governor agreed to refuse donations from industry giants GEO and CoreCivic. U.S. Reps. Debbie Wasserman Schultz and Charlie Crist have also signed the group’s anti-prison-donation pledge.

But ridding the state and national parties of prison PAC money is proving more difficult because national groups like the DCCC still take thousands from the industry. The DCCC has taken $10,000 from Boca Raton-based GEO alone in the 2018 cycle, according to the Center for Responsive Politics.

Roughly a month ago, Miami-Dade Democratic Party Chair Juan Cuba suggested that his group should push the state party to adopt a ban on all private-prison donations, including from national Democratic PACs. Cuba submitted a resolution to the state party, which said that “Florida Democratic Party will lead by example and refuse any donations from private-prison companies, namely C.C.A. and GEO Group.” The statement also encouraged individual candidates to refuse such donations.

Importantly, in its original form the statement said the party “will additionally refuse donations from the registered lobbyists of, and any PACs associated with, private prison companies.”

But by the time the resolution reached an “executive committee meeting” at Sunday’s fundraiser — the “Leadership Blue Gala” at the posh Diplomat Hotel — state leaders had stripped out that last sentence. According to emails New Times obtained, party leaders were scared to lose nationally sourced donor cash from prison profiteers.

“Team, the two clauses below are extremely problematic,” reads an email from Florida Democratic Party Executive Director Juan Peñalosa. “I did a quick search of OpenSecrets and if we adopt the (clauses), we are saying that we cannot accept money from the DCC or a few other major Democratic PACs. GEO Group is associated with those PACs.”

Emails show that Juan Cuba, chair of the Miami-Dade County Democratic Executive Committee, stripped out the language after Peñalosa’s request, making the resolution basically toothless. Peñalosa did not immediately respond to messages from New Times today. Cuba, however, said he was glad the measure passed in its original form.

“Since I wasn’t going to be there to ensure passage, I was worried it would get defeated and was only making sure the resolution had the best chance of passing in order to move the ball forward and build on it,” Cuba said. “I’m happy that the original language passed.”

On Sunday, when the watered-down resolution was presented to the committee, party treasurer and Miami-Dade County State Committeewoman Francesca Menes called out party officials for scrubbing the original language. She demanded that they add back in the original bans on all private prison cash.

While most party members seemed eager to crack down on prison profiteers, a few outliers, including Broward County Democratic Party Chair Cynthia Busch, disagreed. Busch was eventually outvoted and the language was added back into the draft.

Party Chair Terrie Rizzo then proposed a final vote on the resolution, but she only made it midway through her sentence when a Broward County party member stood up in the back of the room and cut her off.

“Point of order!” the man shouted. He demanded a formal check on whether enough voting party members had showed up to constitute a voting quorum — an attendance roll-call check that can take anywhere from 30 minutes to an hour to complete. His request was met with a rain of boos. The move is a common procedural trick to stall or kill controversial votes. (A similar move infamously stalled a 2017 Miami-Dade County resolution censuring State Attorney Katherine Fernandez Rundle.)

So who was trying to stall the prison cash ban? The man in the back finally identified himself as none other than Craig T. Smith,the former White House political director under President Bill Clinton. Smith was also a prominent volunteer on Hillary Clinton’s 2016 presidential campaign. And, throughout the voting process yesterday, Smith steadfastly voted against the prison-donation ban.

His quorum call forced party officials to individually call names off an attendance sheet for 30 more minutes — in that time, multiple progressive activists told New Times they were worried the attendance-call trick was going to doom the vote.

In the middle of the attendance call, New Times found Smith — who was typing on a laptop at his seat in the back of the room — and asked him why he requested the lengthy procedural vote when it seemed the resolution was about to pass.

“I just didn’t think we had enough people to vote,” he said. Was the move a trick to hamstring the voting process? He sighed.

“Look,” he responded. “This is a controversial issue. So I think we should make sure we’re following the rules if it’s going to pass through the committee.”

After he spoke with New Times, Gilmer, the Dream Defenders activist, cornered Smith at his seat and the pair engaged in a heated debate.

As it turns out, the Democrats did have a quorum and were finally able to vote on the measure. Due to a weighted-voting tally, the measure passed 774 votes in favor to just 61 opposed. 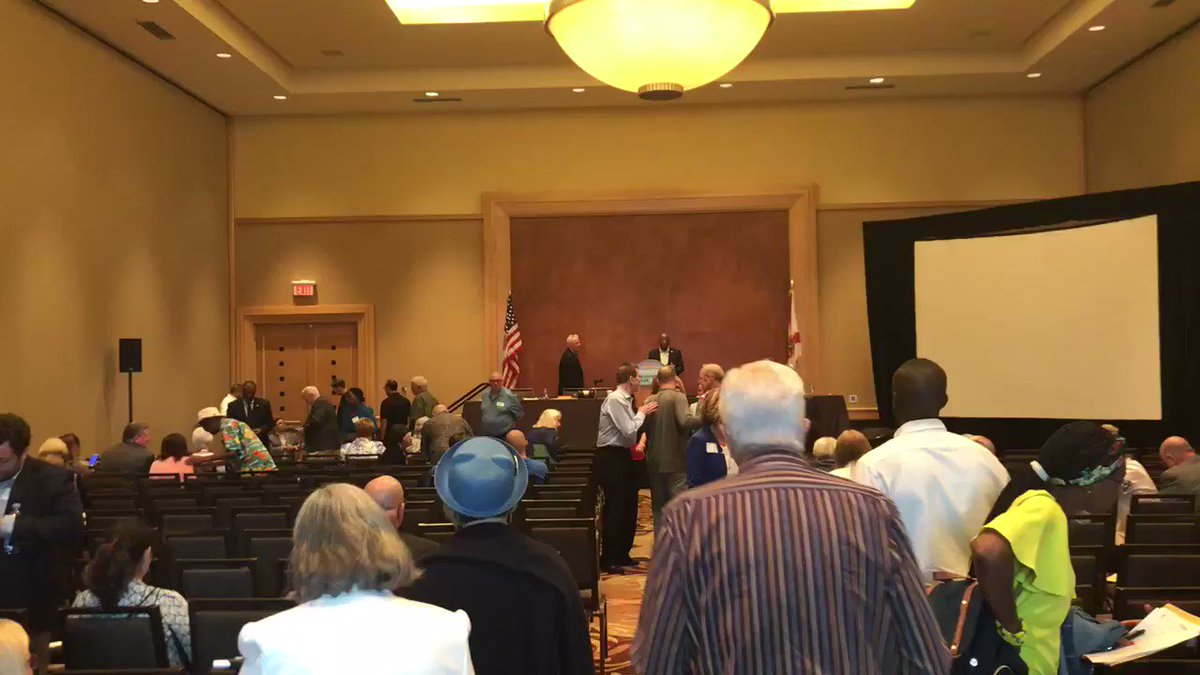 This is HUGE! We just passed a resolution at the @FlaDems Executive Committee meeting banning private prison money and all affiliated PAC and lobbyist money in the Florida Democratic Party. It took two hours and pushback from some of the leadership but we did it!

“Thankfully, there were so many people in the room that wanted the Democratic Party to put teeth behind their rhetoric,” an ecstatic Gilmer told New Times. The activists say Florida can serve as an example for the rest of the country’s state-level Democratic parties.

In a follow-up press statement released today, Juan Cuba, the chair of the Miami-Dade County Democratic Party, put pressure on the DNC itself to quit taking donations from private-prison contractors.

“Now more than ever, Democratic Party leaders must lead with our values,” Cuba said in today’s news release. “That includes a complete rejection of the political influence of immoral industries like private prisons. I’m proud of the Florida Democratic Party and I hope the DNC follows suit.”