Via The Nation | Julianne Hing 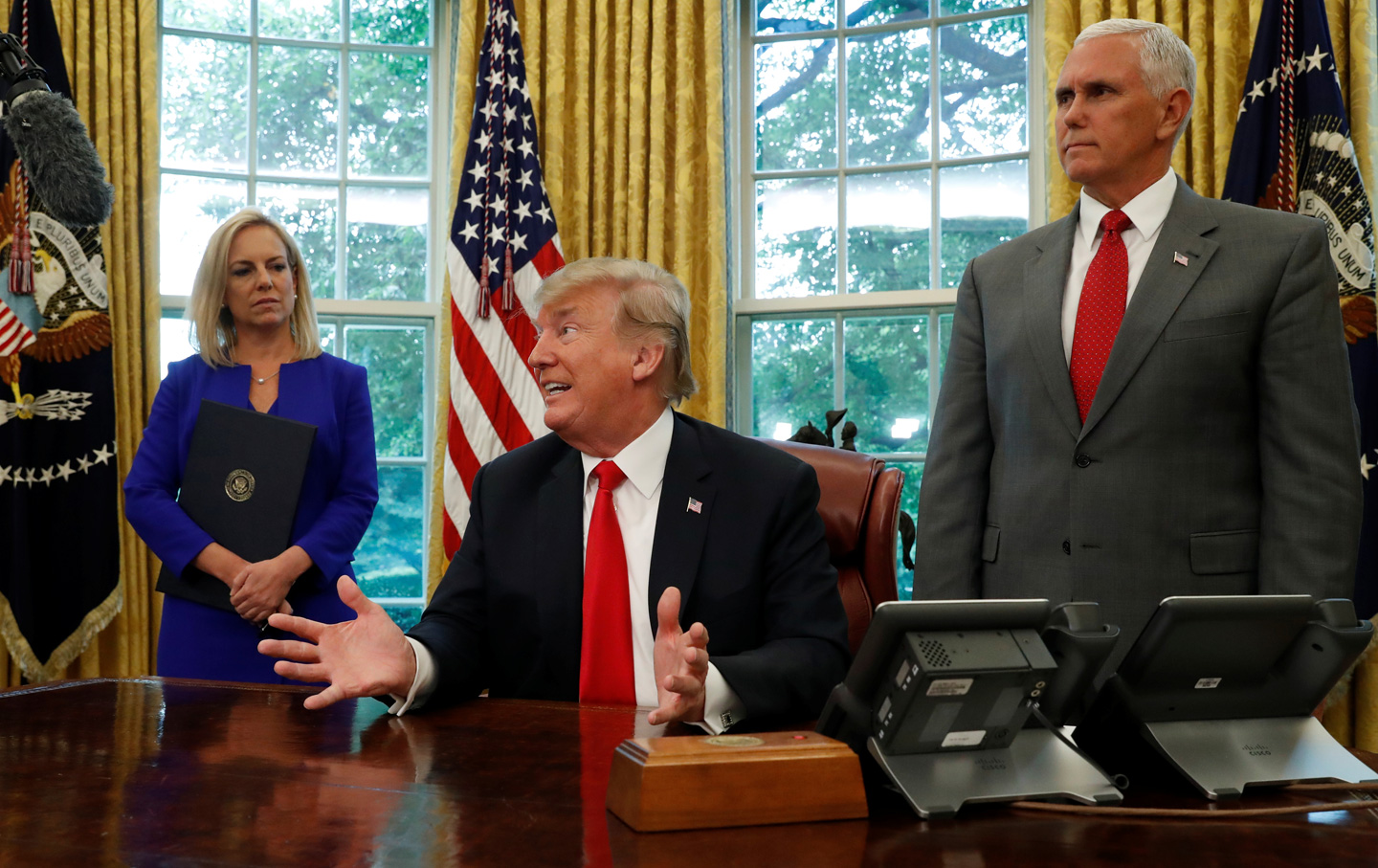 President Trump is fond of executive orders. So often does he sign them that the American public is by now familiar with the image of Trump seated in the Oval Office with his felt-tipped markers, forcing his Sharpie signature across a page, then holding the leather-bound document up for the cameras. The act has theatrical value, which appeals to his authoritarian predilections. A president signing an executive order can almost look like a king issuing a fiat.

On Wednesday, Trump signed another such order. He caved to an overwhelming outcry from a widespread group of critics that came to include the pope and former first lady Laura Bush and announced that his administration would end the policy of separating children from parents at the border. “Anybody with a heart feels very strongly about it,” Trump said shortly after signing the executive order. “At the same time, we don’t want people coming in illegally. This takes care of the problem.”

But like so much else in Trumpland, there is how something appears, and how something actually operates in reality. In the hours between the announcement of the order and its actual release, many hailed the change as an about-face—a stunning and rare pivot for a president who has little capacity to admit error. But now that the executive order is out, what is clear is that this document offers no fix at all. The Trump administration intends to trade the practice of separating children while it prosecutes parents for another kind of horror: locking up parents and children together. And, according to the executive order, this new incarceration of families could well be indefinite.

“This Administration will initiate proceedings to enforce…criminal provisions of the INA until and unless Congress directs otherwise,” the executive order lays out. “It is also the policy of this Administration to maintain family unity, including by detaining families together where appropriate and consistent with law and available resources.”

The practice of separating children from their parents is a symptom of Attorney General Jeff Sessions’ “zero-tolerance policy” announced this spring. Under Sessions’s new rules, US attorneys now must criminally prosecute every person apprehended while attempting to enter the country between official ports of entry without proper documentation. But because many people come to the United States as families and because there are restrictions on how long children and parents may be held together, the government separated children from their parents, treating separated children as “unaccompanied minors.” The executive order does not affect that zero-tolerance policy at all; those prosecutions will continue.

Parents and babies are still going to be incarcerated while those prosecutions continue; it just appears that now they will be held together. And under the executive order, any public agency, including the Bureau of Prisons and the Department of Defense—which would mean the federal prison system and military bases—must make its facilities available for the incarceration of these families.

What’s more, the executive order announces that the Trump administration intends to petition a court to revisit the landmark 1997 Flores settlement, which set forth minimum conditions for the treatment and detention of migrant children. The centerpiece of Floresrequires that children be released from government custody as quickly as possible. Separately, it requires that those who are held have access to education, health care and recreation, and that they not be kept in confinement. The Trump administration wants to dismantle those minimum child-welfare protections so that it can, in the words of the executive order, “detain alien families together throughout the pendency of criminal proceedings for improper entry or any removal or other immigration proceedings.”

But, because Flores is still current law, the Department of Homeland Security is still bound by it, and cannot detain children for longer than is absolutely necessary to find a placement for them outside of detention. Therefore, “this Executive Order is a restatement of current policy, which is to prosecute, detain, and quickly deport Central American asylum seekers,” says Kerri Talbot, legislative director for Immigration Hub, a DC-based, pro-immigration umbrella group.

The last decade of this country’s attempt at running family detention centers has been filled with scandal and litigation. Most recently, a family facility DHS ran in Artesia, New Mexico, was shut down in 2014 after legal groups argued that the appalling conditions and due-process violations were unlawful.

“I remember how I felt sick to my stomach when we walked through the cafeteria, and I saw nothing but a stack of high chairs as far as the eye could see,” Karen Tumlin, director of legal strategy at the National Immigration Law Center, said of her first visit to the Artesia facility. Tumlin was one of the first attorneys to gain access to the center.