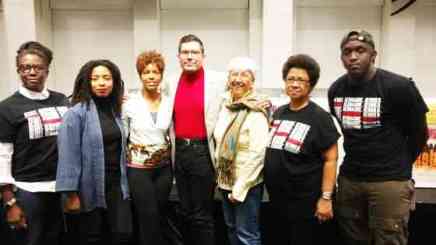 R3 Coalition-CHI is, according to its website, “a coalition of Chicago-based groups and individuals, [formed in Nov. 2016], committed to building relationships and strategies for responding to the current racist and proto-fascist political movement.”

Activist, scholar and professor and R3 Coalition-CHI member Stacey Sutton welcomed the over 250 attendees and spoke about how the coalition formed one year ago when activists, scholars and artists gathered on the South Side to discuss ways to move forward post-election. Sutton said they meet every Thursday to console each other and support each other’s work.

“The conditions of Black, Latinx, poor, feminist, queer, trans and anti-capitalist allies were being threatened and the neo-fascist regime that was taking power was only going to further that repression,” said Sutton.

Sutton said R3 Coalition-CHI was borne out of those concerns and now there are over 35 progressive organizations and labor unions under the group’s umbrella. She explained that this events focus was to learn about past and present progressive organizing campaigns in Chicago and Jackson.

Lumumba invoked her late father and former Mayor of Jackson Chokwe Lumumba’s name spoke about the need to “free the land” that began in 1971 near Jackson ( her father was involved with this movement ) when a group of 500 people went on a caravan to the land they purchased with the hope of building a new community free of oppression and violence. She said when they got to the land law enforcement was there to prevent them from claiming that land. Lumumba said her father resisted the police and was successful. Lumumba noted that this event and other events led to the creation of the Malcolm X Grassroots Movement and the New Afrikan People’s Organization.

“There is a desire for liberation to own and hold something that is yours,” said Lumumba. “It is essential to control the space we live in and until we do that we have no real power. What does it mean to be self-determined?”

Lumumba explained that when her father ran for mayor he won with over 85 percent of the vote. When he died her brother ran to take his seat but lost that race. Despite the loss Lumumba said they kept working on progressive causes and building trust in the community. When her brother ran again this past spring he won with a lot of local and national support. She said when her brother took office he decided to make radical change including turning the city’s financial situation from a near bankruptcy to solvency. One thing her brother and activists like herself was able to do is prevent the state takeover of Jackson’s school district.

In terms of lessons learned over her two decades of grassroots organizing, Lumumba said “love has to be at the cored of building the electoral process.”

Coronado said people look back on Mayor Washington’s campaign in a romantic way but it is more important to reflect on what led to that campaign. She explained how she got involved in organizing in the Pilsen and Little Village neighborhoods as an immigration activist in the early ’70s ( when the city was experiencing issues with housing, education and public transit that affected minority groups writ large ) and the importance of coalition building with other ethnic and racial groups because of the large number of immigrants from across the world living in Chicago.

“Weather has a lot to do with things happening in Chicago including elections,” said Coronado.

Coronado explained that the Black and Latino communities came together due to Mayor Jane Byrne failing people of color at every turn including the creation of the Near West Side Black Latino Coalition because people of color were interested in running for office. She emphasized the importance of holding elected officials accountable, even those that one agrees with. She outlined how, after Mayor Washington died, they surrounded City Hall to ensure the city council’s process in choosing the next mayor was fair and transparent.

“Mayor Washington made people feel like the city was for them,” said Coronado.

“Something amazing is happening in this country,” said Ramirez-Rosa. “In my short time in public life; I have never seen so many rooms, actions and people involved in the process to fundamentally transform this world and take back power from those who have seized it for their own profit and gain, including in Jackson and hopefully very soon here in Chicago.”

Ramirez-Rosa spoke about building an electoral movement to help everyday people not the rich and powerful and this includes the corporate Democrats that run Chicago. He noted that when he was working for Rep. Luis Gutierrez he felt like the needs of the people were not being met so he started attending Organizing Communities Against Deportation meetings. Ramirez-Rosa learned the importance of engaging in an inside/outside strategy to get things done i.e. putting elected officials and their staffs in the service of movements for social and economic justice. This is what he does every day as an alderman.

Baptiste spoke about organizing beyond electoral politics. She explained how Assata’s Daughters got involved with the #ByeAnita campaign as a reaction to the police violence in the city directed at Black people. Baptiste said the campaign never mentioned her challenger Kim Foxx and in the end it was invigorating, challenging, scary, amazing and beautiful. She also explained the current #NoCopAcademy campaign to stop a proposed $95 million police academy from being built on the West Side.

The a capella duo KoStar closed out the event.