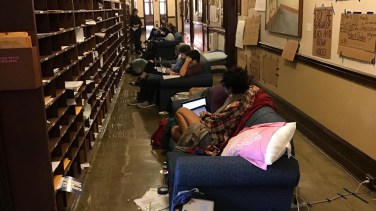 Students are sleeping in the Reed College administration building in protest of the school’s primary bank.

The group Reedies Against Racism is demanding that the school stop banking with Wells Fargo.

According to the group, about 25 people have been sleeping in the administration building for the past two days.

The students said they are protesting the school’s use of Wells Fargo because of the bank’s involvement in private prisons, the support of the Dakota Access Pipeline and the recent investigation into the company’s use of fake accounts to make money.

Reed College officials released a statement regarding the protest, stating the “the college is considering these concerns” and that the issue would be discussed during a Board of Trustees committee meeting in November.

The protest group has raised concerns to the Reed administration regarding Wells Fargo’s investments with companies that operate for-profit prisons, companies that they view as complicit in Iraeli occupations, and funding of the Dakota Access Pipeline project.

The college is considering these concerns through its established processes which are outlined in Reed’s Investment Responsibility Policy. The investment committee of the board of trustees will be discussing these concerns at its November meeting.

Earlier this fall, students at Reed held a day-long boycott of classes protesting racism and demanding more outreach to marginalized communities and mandatory training on the subject of race sensitivity for faculty and staff.