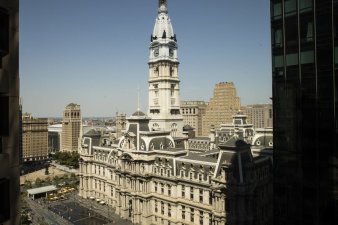 Via The Inquirer | By Claudia Vargas

Some members of the Philadelphia Board of Pensions want to sell off $1.2 million worth of stock it owns of for-profit prison companies as a statement of moral disapproval of an industry that has drawn health and safety complaints.

The amount is a sliver of the $5 billion that the fund has in its various investments, but the city has a history of adjusting its portfolio around progressive causes.

“The board is one of the leading organizations in the country in having a social conscience,” Pedro Rodriguez, the city’s Human Resources Director and pension board member said, referencing the fund’s focus on inclusion and diversity in its portfolio. “This is just an extension of that philosophy.”

But a resolution to divest in the fund’s holdings of three private prison companies — the GEO Group, CoreCivic and G4S — was put on hold last week after members were told that the city has 184 prisoners housed at Hoffman Hall, a private prison in Philadelphia’s Juniata Park neighborhood.

“The city wants to divest in private prisons, but they are also sending prisoners to a private prison,” said City Controller Alan Butkovitz, who sits on the pension board. “That raises a hypocrisy issue with a capital ‘H.’ ”

Hoffman Hall is part of the Community Education Centers network, which was purchased by the GEO Group in April.

Aside from that awkward realization, the private prison divestment proposal has raised concerns among some board members about making investment decisions based on social objections. Board members have a fiduciary responsibility to the fund.

Ron Stagliano, one of the pension board members and a representative for the Fraternal Order of Police, said, “I have to be concerned as to the effect on our return on investment.”

Christopher DiFusco, the pension board’s chief investment officer, said that the $1.2 million the fund has invested in private prisons are part of index funds and are “relatively small” compared with the fund’s $5 billion exposure.

“The performance of these stocks would not move the needle significantly in either direction,” DiFusco said.

Divesting in private prisons is not a new idea. New York City’s pension fund trustees decided in June to divest $48 million worth of stock and bonds from the same three private prison groups in which the Philadelphia fund has investments. Overall, New York has $175 billion in pension investments.

“For me, it’s a novel idea,” Reynolds Brown said. “Let’s consider the possibility.”

The board has previously divested its funds from other controversial industries such as tobacco and gun manufacturers and predatory lenders. It also has pulled money out of Sudan and Iran.

Some have suggested that the board should consider divesting from the fossil-fuels industry out of concern over climate change. (The fund has about $330 million invested in fossil fuel companies.)

Butkovitz said he is concerned that if the board agrees to divest in businesses that get negative headlines, it could affect the fund’s ability to meet the 7.7 percent rate of return it needs in order to be able to cover 80 percent of projected liabilities by 2030.

“The more restrictions they have, the harder it is for them to have our portfolio hit the target,” Butkovitz said. “Every company in the world is mired in some controversy.”

City finance director Rob Dubow, who is also chairman of the pension board, said that any decisions to divest funds is based on “our fiduciary duty to its members and beneficiaries, and our legal responsibilities to the fund.”

“At the same time, it is appropriate in certain circumstances to make strong social statements through divestment,” he said. Dubow added that the board also engages with publicly traded companies by voting its stock shares a “certain way” to address fiscal and social issues.

While the city and pension board decide what to do about the private prison divestment proposal, city officials say they will start moving the city’s prisoners from Hoffman Hall to the city prison on State Road, which now has space to accommodate them. Hoffman Hall was contracted in 2006 when the city jail population exceeded 10,000, city spokesman Mike Dunn said. City officials plan to transfer all Hoffman Hall inmates within six to eight months.

Shawn Hawes, spokesman for the Philadelphia Department of Prisons, said that the department has been satisfied with Hoffman Hall since the city contracted with the private facility.