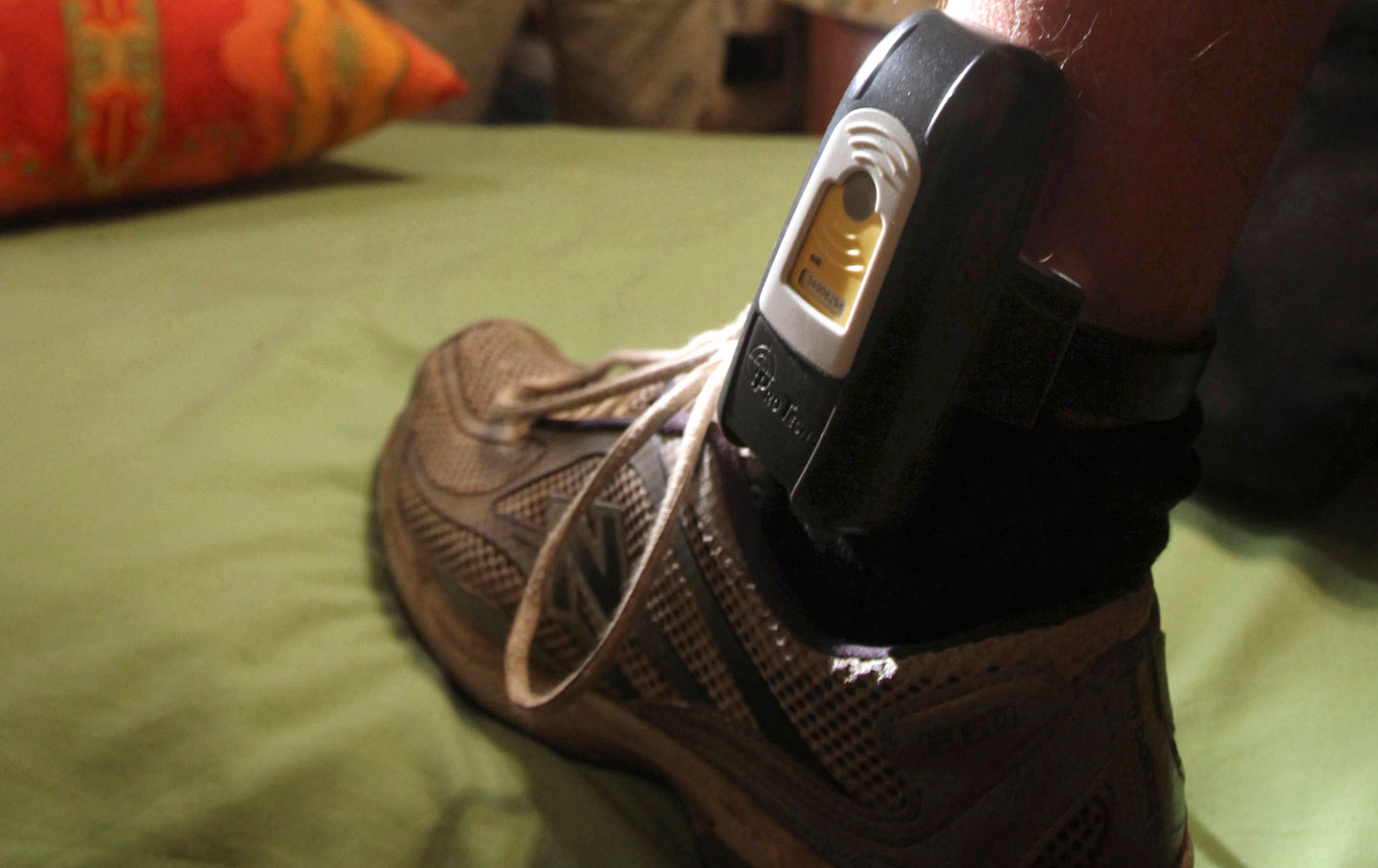 They’ve hijacked the language of reform—but for them, it’s still business as usual.

Last Thursday, private prison stocks dropped like a rock when the Department of Justice announced that it would be phasing out its use of for-profit detention facilities. If you were an investor who had no ethical qualms about profiting from an industry that’s been accused of perpetrating a number of human rights abuses, it would have been a good time to buy. It turns out that reports of the industry’s imminent death have been greatly exaggerated.

Experts who track the business tell The Nation that as mass incarceration reform has become a bipartisan issue, private prison companies large and small have seen the writing on the wall, and are aggressively moving into alternatives to imprisonment. In fact, they say, the very same companies that have traditionally lobbied hard for tough-on-crime policies that would assure their facilities a steady flow of warm bodies are now embracing the language of criminal justice reform as they reach out into what they see as more lucrative markets.

“These companies know what they’re doing,” says Christopher Petrella, a lecturer at Bates College who studies the industry. “They’re agile, they follow market trends, and they know where the growth is.” According to Petrella, two of the biggest companies – GEO Group and Corrections Corporation of America (CCA) – “have really pivoted to diversify their services away from traditional incarceration. They’ve both invested heavily in the past five or six years in prisoner rehabilitation services, mental health centers, residential re-entry programs and monitoring technologies for supervised release.” These are all areas that are expected to grow as efforts to reduce the prison population gain traction. Until eight or nine years ago, these companies could have relied on partisan gridlock to maintain the status quo, but as conservatives have come to embrace the issue, their future as jailers has started to look less bright.

“It’s really clear looking at mergers and acquisitions that this is where the big companies like CCA and GEO are headed,” says Caroline Isaacs, program director of the American Friends Service Committee’s Tucson office, and the author of several reports on the industry. “And then there are a whole host of other companies that are sort of popping up to fill in the field.”

In its latest presentation to investors, CCA says, “residential reentry facilities provide offenders with the tools and skills necessary to successfully return to the communities without recidivating,” and brags that “in less than three years, CCA has established the second largest residential reentry platform in the United States and has a robust acquisition pipeline of additional [residential reentry] operators.” The company now “owns or controls 24 residential reentry properties, representing 4,970 beds.”

This isn’t the first time the industry has adapted to hard times as the political landscape has changed. “Private providers were on the verge of bankruptcy” in the late 1990s, Michele Deitch, a senior lecturer in the Lyndon B. Johnson School of Public Affairs at the University of Texas, Austin, says. As privatization of public services became a hot trend in the states in the late 1980s and 1990s, many companies overbuilt. But by the late 1990s, “a lot of states started pulling out of contracts with private providers, mostly because of performance problems and the fact that cost-savings never materialized.”

CCA’s stock price plummeted from a high of over $70 per share in the beginning of 1998 to just $1.15 per share three years later. Wackenhut Corrections Corporation, which would change its name to GEO Group in 2003, lost more than two-thirds of its market value during the same period. Then, in the aftermath of 9/11, as the federal government began detaining huge numbers of undocumented immigrants — many of whom would have previously been released while awaiting a hearing — the industry aggressively targeted that market and, as Deitch puts it, “the federal government essentially bailed them out, when it could have been the end of that experiment.”

She sees parallels between then and now. “They go where they see the writing of the wall. And now, with so much of the country shifting into more of a rehabilitative mode, and moving away from hard incarceration into more treatment-oriented programming, we’re seeing more privatization” in various alternatives to incarceration.

The private prison industry, aware of its nagging public relations problems, “is rebranding – embracing this whole [reform] movement,” says Isaacs. “You see this kinder, gentler rhetoric about how much they care about re-entry and reforming people’s lives and helping [people]. Essentially, they’re hijacking the rhetoric of the prison reform movement to their own ends. They’re saying, ‘well yes, prisons are terrible places so we’re going to create this other kind of institution that we’re not going to call a prison. It’s a shell game.”

Meanwhile, the problems that plagued the private prison industry are also becoming evident in these alternatives to incarceration. “It’s the same business model,” says Isaacs, “cut and deny, cut and deny – this is how they make their profits.” She points to “horror stories…coming from some of these private forensic hospitals. You apply this profit-motive-led business model to people who are severely mentally ill, you don’t train your staff and then they basically abuse people.”

Mark Bartlett, a 33-year-old veteran of the war in Afghanistan, had worked for ten years at two residential re-entry facilities operated by a small company in San Diego when they were acquired by CCA in 2013. Immediately, the company took on new contracts, and significantly increased the number of inmates housed in the facilities. “As we transitioned from a small-business, we saw so many things go wrong when CCA came in,” he says. “They cut down on eggs, and on food portions. They cut down on staff, and they cut down on programs and resources for the inmates. They stopped giving staff raises. The morale drastically changed. There was overcrowding, and they didn’t have enough staff members to manage the facility. And it turned into a dangerous environment. There were always fights, there were more staff assaults. There were more escapes. The narcotics use just drastically went up. The air conditioning units were always going out, and when temperatures go up, tensions rise. But they would only do these temporary fixes because it always came down to costs.” Bartlett would become a whistle-blower, end up in a labor dispute with the company over health benefits, and has since gone on to become an activist, co-founding a group called People Over Profits-SD.

According to the watchdog group In the Public Interest, private companies are already deeply embedded in all kinds of carceral services other than locking people up. They run many prisons’ commissaries, provide healthcare and food services, transport prisoners between institutions, provide financial services and phone and video calls home – almost always with usurious fees – test for drugs and provide substance abuse therapy for those who fail, and on and on.

And what Bartlett described at that re-entry facility in San Diego is anything but an aberration on the increasingly privatized margins of the corrections system. Poor healthcare and substandard nutrition by private companies has sparked a dozen lawsuits and more than one riot. The ACLU is suing Dekalb County, Georgia, and the for-profit parole company Judicial Correction Services, Inc., alleging that they “teamed up to engage in a coercive debt collection scheme that focused on revenue generation at the expense of protecting poor people’s rights.” In Michigan, Aramark Correctional Services, the leading provider of inmate meals, was cited for almost 3,000 sanitation violations in a seven-month period in 2014. Aramark had secured the contract with the help of a shady, industry-sponsored study promising huge costs savings and better services; the state cancelled it after Aramark’s underpaid workers were arrested for smuggling drugs into the facility, and one approached an inmate and attempted to arrange to have another inmate at a different facility murdered. There are dozens of stories like these all over the country.

But there’s another problem that’s unique to companies providing alternatives to incarceration. Caroline Isaacs points to “a disturbing trend of net-widening” – bringing more people into the system, and keeping them there, even if they’re not behind bars. “Instead of moving people into the community, with some form of accountability, they’re putting more and more people on ankle monitors who would otherwise just be left alone.” She and other experts expressed concern that just as these companies used their lobbying might to shape immigration policies to their advantage in the 2000s, they’ll influence future measures to reduce the prison population in ways that allow them to continue to profit. Michele Dietch says that while “treatment is a good thing,” she expects that the industry will push for residential rather than outpatient programs because “that’s where the money will be.”

“It’s important to remember that there is a principle that’s clearly backed up by the research that you want to use the least restrictive measure in dealing with someone in the system,” says Deitch. “Giving someone more treatment, or more restrictions, than they really need, can often have worse outcomes for them.”

The problem that we’re likely to face as private industry adopts the mantle of mass incarceration reform is that the least restrictive measure is rarely the most profitable.