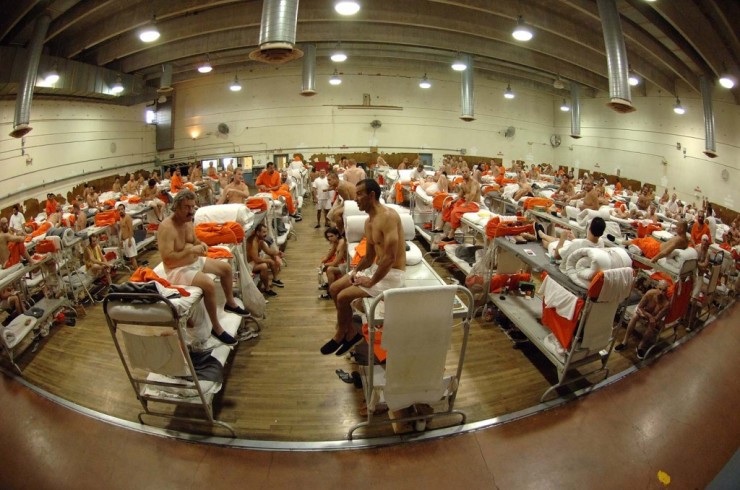 As the immigration reform debate heats up, an important argument has been surprisingly missing. By granting legal status to immigrants and ordering future flows, the government would save billions of dollars. A shift to focus border security on real crime, both local and cross border, would increase public safety and render a huge dividend to cash-strapped public coffers.

This kind of common-sense immigration reform has the multibillion-dollar private prison industry shaking in its boots. Its lobbyists are actively targeting members of Congressional budget and appropriations committees to not only maintain, but increase incarceration of migrants—with or without comprehensive immigration reform.

While a broad public consensus has formed around the need to legally integrate migrants into the communities where they live and work, private prison companies–notably the two giants Corrections Corporation of America (CCA) and The GEO Group– know that providing secure legal status for immigrant residents could put a serious dent in their ability to funnel taxpayer money into migrant imprisonment schemes.

CCA and GEO also know that in the current immigration debate they cannot come straight out and say ‘immigrants should be defined as criminals because it makes us rich’—even though it does. CCA comes pretty close to saying this in its 2010 Annual Report, when it warns that “any changes [in the laws] with respect to drugs and controlled substances or illegal immigration could affect the number of persons arrested, convicted and sentenced, thereby potentially reducing demand for correctional facilities to house them.”

So most of their work is behind the scenes. Their number-one goal: to assure that no matter what else happens, Operation Streamline—their goose of the golden eggs—survives, with more money than ever.

What happens to Operation Streamline will determine whether government contracts for migrant lock-up will continue to bloat the private prison industry. Operation Streamline, begun in 2005, does primarily two things: it imprisons men and women for immigration violations, sometimes up to ten months or more, and it streamlines federal funds to private-run detention centers—more than a billion dollars a year.

Bob Libal, of Grassroots Leadership, which issued a major report on Operation Streamline’s migrant-to-prison pipeline last year, commented on Operation Streamline and related programs, “These are programs where immigrants lose years of their lives and taxpayers lose billions of dollars, but the private prison corporations are counting on these programs to make profits to pay their executives exorbitant salaries and reinvest their money in lobbying efforts.”

He notes that the problem of decoupling immigration reform from enforcement is a political—and economic—one. “There is no legal reason why we can’t fix our immigration system and legalize people who are here without increasing border militarization and criminal penalties.”

It would seem contradictory for a program that rounds up undocumented migrants to be funded alongside comprehensive immigration reform. After all, the point of comprehensive immigration reform is to create labor market and family reunification mechanisms that take into account real-life dynamics in legal ways. That should drastically reduce, although not eliminate, illegal border crossing, since migrants would much rather cross legally than put their lives in the hands of human smugglers or fate, when given the option. Reduced undocumented crossing, which is already happening due to economic factors, eases up enforcement requirements.

Yet both President Obama’s plan and the plan put forward by the Senate “Gang of Eight” call to increase Border Patrol enforcement programs. With migration from Mexico at “net zero” and a supposed paradigm shift to fix the immigration system, the plans still focus on the archaic, inhumane, wildly expensive and spectacularly inefficient enforcement programs of the past.

One reason is that so many members of Congress have got it in their heads that immigrant-bashing (and incarcerating) is good for image-building—despite the overwhelming proof of the power of the Latino vote in the last elections. The other reason is the private prison lobby.

Private prison corporations, especially CCA and GEO, have begun a massive effort to assure that even if immigration reform goes through, the practice of locking people up for immigration infractions will continue.

They have the money and the clout to push their agenda on the hill. Working without fanfare, the private prison lobby has targeted key Congressional representatives, especially on the finance, budget and judiciary committees. Using the lever of hefty campaign donations, lobbyists for these companies have been working for years to get Congress members in their pockets by slipping money into theirs.

On Jan. 28 the Gang of 8 Senators announced a bipartisan deal on CIR. This group has one thing in common besides a commitment to their plan—their ties to the border security industry that has developed thanks to Operation Streamline.

A guide to private prison lobbyists: The firm of Akin Gump Strauss Hauer & Feld is contracted by CCA. It received $220,000 from CCA for its lobbying services in 2012. Last year, it targeted nearly every member of the Senate Budget and Finance committees and a handful of House representatives, notably Debbie Wasserman Schultz D-FL, of the Budget and Judiciary committees. It forked over at least $32,416 to the now-beleaguered Bob Menendez, D-NJ, a member of the Gang of Eight.

Most private prison lobbyists, like other industries, have worked in Congress. The Center for Responsive Politics, which tracks the “revolving door” between private interest lobbies and public service, notes that 28 of 33 CCA lobbyists, worked in government, many as staff on Congressional budget committees.

Among the gang of eight senators, all but Lindsay Graham and John McCain have received significant money from the private prison corporations. Enlace, the group that coordinates the private prison divestment campaign, has compiled data on how the private prison industry uses funds to pressure Congress for more enforcement business in a comprehensive Immigration reform bill. The following list shows their related committee assignments and donations received:

* Marco Rubio (R-FL): Member of the Commerce, Science, and Transportation Committee, and Foreign Relations. Rubio, considered the up-and-coming savior of the Republican Party, received at least $65,000 in private prison money in 2012. Those contributions included $34,300 from the GEO Group, $750 McBee Strategic Consulting and $500 from Navigators Global. Lazard and Wells Fargo (also heavily invested in private prisons) gave $15,800 and $13,650, respectively.

In addition to key members of the bipartisan Senate gang of eight, several House members have been identified by the campaign against private immigrant detention centers. The first is Patty Murray (D-WA). As chair of the Budget committee and member of Appropriations, Murray is in a hot seat as far as the private prison lobby is concerned. This is reflected in the money they have invested in her: Akin Gump gave $20,800; McBee Strategic Consulting $74,700; and Mehlman $1000. In addition, she received $47,700 from FMR and ($21,450) from Wells Fargo.

The second is Debbie Wasserman Schultz (D-FL).   Wasserman Schultz is on the House Budget and Judiciary committees and chair of the Democratic National Committee.  She too has received considerable prison money: Akin, Gump et al ($19,600); and contributions from Mehlman family members totaling $2,500.

Getting What You Pay For

What these lobbyists want for their money is an immigration reform bill that tightens, rather than loosens the criminal net for undocumented workers and their families.  The prison corporations are wizards at pulling money out of the federal government. Half of their total earnings are government contracts and the industry would have gone under if not for its success at passing and preserving laws that make driving without a license or drinking a beer in a park, crimes punishable by months of prison time for migrants, in addition to being deported.

Why would the government spend millions of dollars to incarcerate people that it is already planning to deport? Good question, rarely asked. Clearly, the answer has nothing to do with public safety—first, because the “crimes” they are accused of pose no direct threat to public safety and second, because in any case the individual is being deported.

The entirely illogical step of pre-deportation detention was invented by the private prison industry. The prison industry has taken of the surge in Obama deportation activity—with a record 1.5 million deported in his first term–, Homeland Security’s voracious appetite for public funds, and the pork barrel of enforcement money available from a Congress that’s more hawkish on immigrants than on enemies.

Last year, the Obama administration spent more money on immigration enforcement that all other federal law enforcement agencies combined—a staggering $18 billion dollars. The detention centers receive $122 per person, per day in government funds–an amount that would be a godsend to a homeless family or unemployed worker.

Peter Cervantes-Gautschi, director of Enlace, notes, “The private prison industry is swamping the Senate Budget and Appropriations Committees to try to buy them to keep Operation Streamline so they can incarcerate more immigrants in private prisons despite immigration reform.” There is nothing surprising about that, he adds, “That’s their business.”

The national movement made up of local organizations against private detention centers has a simple demand—stop funding private immigrant detention centers. Through grassroots organizing they have been able to block the construction of new centers and pressure funds and individuals into divesting from private prison stock. They have also turned their sights on the politicians that feed federal money into the system.

Maria Rodriguez of the Florida Immigrant Coalition, a member of the divestment campaign, explains that her group is meeting with Florida Congressional representatives to counteract the influence of the private prison lobby.

“In the broadest sense, what we’re trying to do is to show the financial impact on policies and the conversation in the context of immigration reform,” she says. Rodriguez notes that mandatory detention laws cost millions of government dollars when alternatives have been shown to be nearly as effective at a fraction of the cost.

Are members of Congress being bought off? Rodriguez replies, “I think that when people are being heavily lobbied and when there’s financial interests involved and when our representatives are benefiting from those financial interests and directly through lobbying, it compromises their ability to do what’s right for taxpayers and immigrant families. I don’t think anybody is naïve about the influence of lobbyists on decision-making.”

Campaign leaders say it’s important for constituents to know the kind of pressure their representatives are under. There is a lot at stake for the private prison companies. CCA and GEO reported combined revenues of $3 billion dollars in 2011, with nearly half-$1.3 billion- coming directly from federal government. They will fight hard for continued incarceration under immigration reform—whether it makes sense policy-wise or not.

The human rights issues involved in locking up migrants for profit, separating families and detaining individuals in poor and humiliating conditions rarely even make it into the debate. But for immigrant and anti-detention center organizations these issues are central. As politicians are tempted to curry favor among the prison industry and conservatives, there is more talk of “enforcement” as the trading chip for citizenship and less talk of human rights.

With immigration reform apparently going down the final stretch, citizens and organized communities are scrambling to offset the power of the prison lobby and other interests vested in repressive border measures. They hope that greater transparency and public awareness of the role of private prison corporations will lead to a more lasting and rights-based comprehensive immigration reform, one where for-profit immigrant detention centers become a relic of a crueler past.

Laura Carlsen is the Director of the CIP Americas Program at www.cipamericas.org