On June 25, the U.S. Supreme Court announced its ruling on the constitutionality of Arizona’s infamous SB 1070, leaving intact Section 2(b), which significantly expands police authority to check Arizonan’s papers. National civil rights groups have now asked a lower court to block Section 2(b) on Fourth Amendment and Equal Protection grounds, but the provision may yet take effect in the near future if a federal court injunction issued in 2010 is reversed. 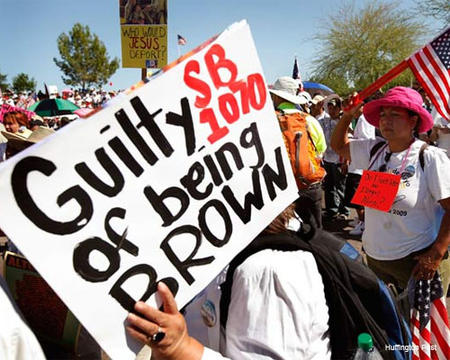 This current legal limbo leaves Arizonans awaiting word on whether police departments across the state will soon be required to investigate individuals’ legal status whenever they have “reasonable suspicion” to believe a person who has been stopped, detained or arrested is undocumented. <!–more–>

Since the passage of SB 1070 in April 2010, dramatic images of mass demonstrations and non-violent blockades have shown the outrage prompted by the deliberate targeting of Arizona’s immigrant communities. While such direct actions continue, the emerging face of resistance in Arizona is community education and training, systematic documentation of racially-biased police practices, and daily non-compliance as Arizona residents refuse to submit to the logic of fear and racial division which defines SB 1070.

One component of the grassroots response involves a campaign led by directly-affected community members in Tucson that is targeting the prison industry for its profiteering on anti-immigrant legislation like SB 1070. Corazón de Tucson, a group of undocumented and mixed-status families organized to defend civil and human rights, has assembled a broad community coalition under the banner of Fuerza! to fight back against the prison industry and hold local leaders accountable for their role in legislative attacks on immigrants. 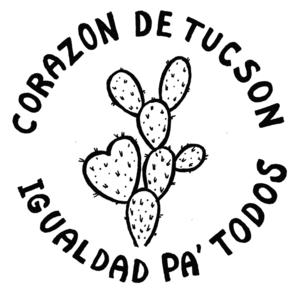 Nationally, much of the current conversation surrounding SB 1070 focuses on the law’s codification of police practices, which hinge crucially upon racial profiling. While requiring police to investigate the immigration status of individuals when a “reasonable suspicion” exists that they are undocumented, the law provides no criteria for making such a determination.

As part of a raging white supremacist discourse in Arizona that equates “criminal” with both people of color and (im)migrants, SB 1070 effectively expands and promotes longstanding law enforcement reliance upon race as a prime determining factor of criminality. Even Arizona governor Jan Brewer, one of SB 1070’s chief proponents, has been unable to describe a non-discriminatory manner of implementing the law, offering only a halting response to one reporter who asked if she could describe what an “illegal immigrant looks like.”

SB 1070 is part of a suite of legislative proposals introduced over the past several years in Arizona specifically targeting immigrant and Latin@ communities with criminalizing measures and expanded enforcement operations. Among these is HB 2281, a law signed just weeks after SB 1070, which banned ethnic studies programs in the state and paved the way for the dismantling of Mexican-American Studies in Tucson schools. The unabashedly racialized rhetoric used by the proponents of such legislation has laid bare political leaders’ willingness to capitalize on white fears of immigrants and people of color to advance a legislative agenda that scapegoats and targets those communities.

While racist police practices, and the associated racialized discourse of criminality, have received national attention in the wake of SB 1070, they are nothing new to Arizona. In the state’s capital Phoenix, police with broad federal authority to arrest immigrants have targeted Latin@ communities for years. Leading the way has been openly anti-immigrant bigot sheriff Joe Arpaio who has made it his duty to round up immigrants through aggressive “crime suppression sweeps” in Latin@ neighborhoods. He now faces two lawsuits over the racist practices of his agency. 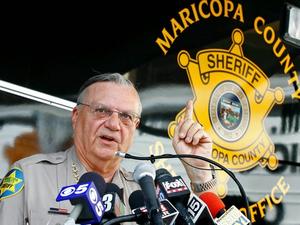 Meanwhile, within the wide swath of militarized territory extending north from the international boundary, Border Patrol agents operate within a vacuum of oversight and accountability, carrying out a deadly enforcement policy and abusing those in custody. A 2011 report published by the humanitarian organization No More Deaths describes a culture of brutality and impunity so deeply entrenched as to constitute the very fabric of Border Patrol enforcement practice.

In border communities, the Border Patrol works closely with local law enforcement and represents a constant threat to immigrant residents. In Tucson, where the agency is a regular presence in Latin@ neighborhoods, for instance, discretionary authority allows police officers to routinely prolong ordinary detentions while the Border Patrol is summoned to assume custody.

This combination of enforcement practices means that people are torn from their families, locked away in immigration detention, and plunged into deportation proceedings every day in southern Arizona, even without full implementation of SB 1070.

What is unique about SB 1070 is perhaps not its inevitably racist application nor its expansion of police powers, but rather the fact that the law represents a new tack in corporate governance of immigration policy in the United States.

Historically, federal immigration policy has been molded in part in response to the pressures of certain powerful industries in the United States. While examples abound, one need look no further than the Bracero Program (1942–64), which was heavily promoted by the agricultural and railroad industries. The program allowed millions of Mexican nationals to enter the United States and engage temporarily in low-wage labor, largely in agriculture.

In the decades since, agribusiness, highly dependent upon low-wage non-citizen laborers to turn a profit, has lobbied against restrictionist policies that would cut off a vital supply of workers. However, in no sense has the industry become a voice for humane priorities such as family unification, full regularization of status, and freedom of movement. After all, agribusiness benefits from international migration precisely because U.S. policies ensure the subordinate status of those who enter the country as immigrants.

While agribusiness benefits from a relatively “open” immigration regime, the private prison industry, in contrast, stands to profit from greater restriction. Thus, the prison industry has been both a chief beneficiary and leading proponent of the push in recent years toward expanded enforcement and increased incarceration. In this regard, SB 1070 and laws like it in Utah, Indiana, South Carolina, Georgia, and Alabama represent a new and carefully refined method of more efficiently instrumentalizing immigrants in pursuit of profit by further criminalizing immigrant communities and widening the dragnet that funnels immigrants into detention centers and penal institutions. 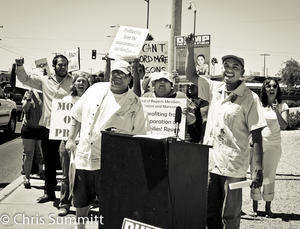 Today, some 8% of state and federal inmates andnearly 50% of immigration detaineees are held in private facilities, a fact that has made private corrections a $5 billion-a-year industry, while powerfully incentivizing anti-immigrant laws and harsh enforcement practices.

The private prison industry appears to have made a cold political calculation that landing more immigrants in detention will bolster its bottom line, undertaking a quiet but crucial role in pushing for state legislation that targets immigrant communities. No longer must immigrants be employed as low-wage laborers to benefit the economic elite; now they must simply fill a bed in a private prison or detention center.

In states such as Utah, Georgia, and Arizona, which have all passed comprehensive anti-immigrant laws, industry fingerprints have been found all over the legislation in the form of powerful lobbyists, campaign contributions, and close relationships with key officials. Unconcerned with the human consequences of the policies from which it profits, the prison industry has made millions as widening criminalization, mandatory detention, and mass deportation separate hundreds of thousands of families each year, destabilize c 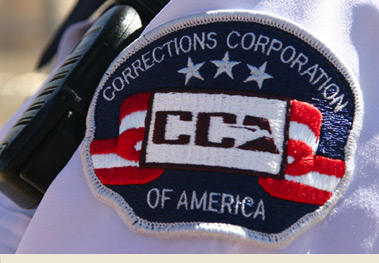 Credit: http://www.cca.comommunities across the nation, and undermine quality of life for residents documented and not.

After witnessing the effects of prison industry profiteering in our own communities, Tucson’s Fuerza! coalition has responded with a campaign to build public opposition. Coalition members have been conducting cafecitos, house meetings and other forms of popular education to promote public understanding of the prison industry and build local capacity for resistance to industry-backed anti-immigrant practices. In order to spur greater national momentum against the prison industry, Fuerza! is urging lifelong Tucsonan and former U.S. Senator Dennis DeConcini to resign from the Board of Directors of the nation’s largest prison firm, the Corrections Corporation of America (CCA). 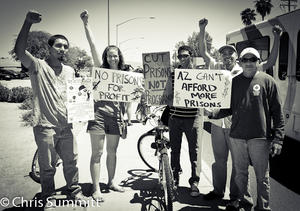 Affiliated with a national movement against the private prison industry, the Fuerza! campaign is backed locally by a broad coalition that includes undocumented and mixed-status families, students, community organizers, advocacy groups, humanitarian aid organizations, and faith communities, all united in their opposition to racism and anti-immigrant legislation. While complementing other forms of ongoing work against SB 1070, the Fuerza! campaign has succeeded in building strong alliances between directly-affected and allied communities in the fight against the prison industry while advancing the vision of a society in which private prisons and immigration detention are a thing of the past.

Matthew Johnson is an organizer with the Fuerza! Coalition Against the Prison Industry and a volunteer with the humanitarian organization No More Deaths in Tucson, Arizona. For more information about Fuerza! and the campaign against the Corrections Corporation of America, please visit fuerzatucson.wordpress.com.