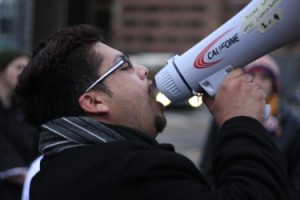 The voices of enraged Metro students and protesters could be heard throughout the streets of LoDo Jan. 24 as they marched against Wells Fargo banks.

The congregation was joined by community leaders at St. Cajetan’s Center to decry Wells Fargo’s presence at Auraria because of the bank’s illegal practices and questionable investments.

The protesters questioned Wells Fargo’s investments in the GEO Group, a private for-profit prison company that deals with the incarceration of illegal immigrants.

The goal of the protest was to bring attention to the misconducts of Wells Fargo and to sever ties between it and Metro.

In the past, Wells Fargo has sponsored career fairs on campus and has also backed scholarships. Representatives from the bank are often on campus to sign students up for a new account.

Members of PAZ led a rally on the steps of St. Cajetan’s Center where they shouted warnings against joining Wells Fargo. Along with Bermudez, several speakers shared poems and stories of how Wells Fargo worked to separate families.

“Profiting off the pain and suffering of these communities is wrong,” said Bermudez.

After the rally, the group began to march through campus. The route of the march led protesters down Colfax, through Civic Park and eventually to the Wells Fargo Building at Broadway and 17th.

Along the way, the march was joined by more students, members of Occupy Denver and others from out of town. The march culminated in a picket line in front of Wells Fargo where the group chanted its slogan “Higher Education, Higher Morals, Dump Wells Fargo Now!”

“I am helping to start Occupy Littleton, so I figured I should be here,” Logan Hall, a protester from Illinois, said.

The Occupy Wall Street movement brought attention to the roles of banks, such as Wells Fargo, in the political campaigning for anti-immigration laws, which private prison companies profit from.

In 2010, a group of corporations including the National Rifle Association and ExxonMobil, helped to finance the legislation on the Arizona Immigration law, according to NPR.

Wells Fargo also has been found guilty and fined for discriminatory predatory lending, which resulted in a $85 million fine from the Federal Reserve Board. The bank has also been accused of continuing illegal foreclosure procedures that other banks have abandoned.

“I will lose equity, but I’m willing to take the hit if it means sending a message,” said David Hughes, a homeowner in the Stapleton area.

As of last September, Wells Fargo was the third highest shareholder of the GEO Group according to Yahoo Finance. A spokesperson for Wells Fargo couldn’t be reached for comment.