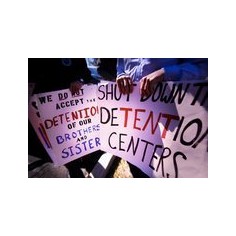 Lamar Smith played a central role in creating laws that allow immigrants to be held in jail indiscriminately. He has directly contributed to the incarceration of millions of immigrants, but he isn’t stopping there. This year he introduced a bill that would enable the government to lock up even more immigrants for even longer periods of time, and would make it almost impossible for anyone to challenge the legality of their detention in a court of law. HR 1932 would overturn court decisions protecting the rights of immigrants who languish behind bars for months and often years. The bill is discriminatory and unconstitutional. If voted into law it will result in the prolonged and unjustified imprisonment of thousands of people, under inhumane conditions, without any safeguard of their civil and human rights.

Sign this petition opposing HR 1932 and tell Congress that you stand up for equality under the law for all people.

This petition is part of the Dignity Not Detention campaign to stop the mandatory detention of immigrants. For more information on how to get involved, please go to www.DignityNotDetention.org

2 thoughts on “Stop the Indefinite Detention of Immigrants!”