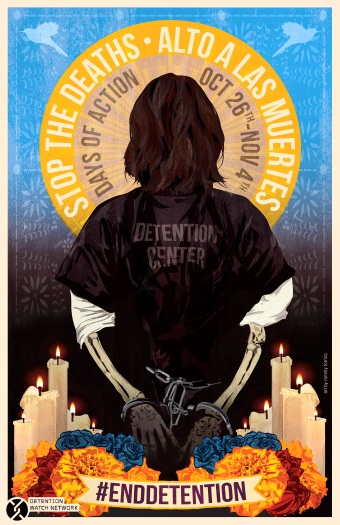 Since 2003, 164 people have died in immigrant detention, including 10 deaths in Immigration and Customs Enforcement (ICE) custody this year alone. From October 26 to Novemeber 4, DWN members and allies will mark the Latin American Holiday, Día de los Muertos or Day of the Dead, with national days of action.
The Day of the Dead Days of Action aims to honor the lives of those who have died in immigrant detention, as recent investigations into deaths in detention have found that inadequate medical care has contributed to numerous deaths. Our goal is to have at least 10 cities across the country participate in the actions to highlight the 10 untimely deaths that have occurred this year, while amplifying the voices of those who have been directly-impacted by the immigration detention system.
Our Demands:
An immediate review of the 10 deaths in ICE custody this fiscal year, and publication of these reviews by January 30, 2017.
The immediate shut down of LaSalle Detention Center, where three of this year’s deaths have occurred.

Take Action in Your Community! Host an Event:
If interested in hosting an event that will amplify detention center deaths, please contact campaign@detentionwatchnetwork.org for support.

Support for your Event. The DWN Action Guide:
DWN has created a Day of the Dead Action Guide, to support members and allies in making their event a success.

Take Action Online. Join our Thunderclap:
To amplify our message, we need your support for our Thunderclap. Thunderclap is a social media tool that allows a single message to be mass shared at the same time via your Facebook and/or Twitter account. We need 100 supporters in total, so please share widely amongst your networks!